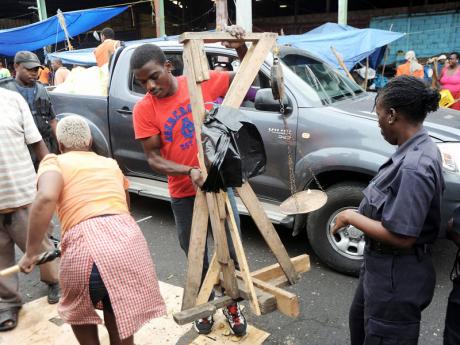 A KSAC worker removes a vendor's scale from the streets last Saturday. 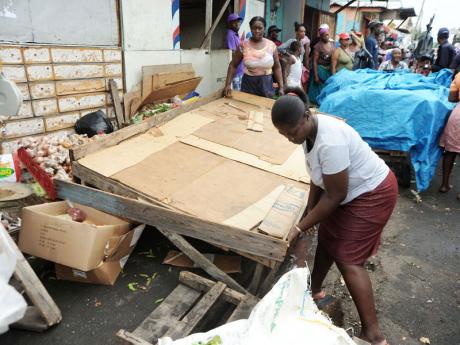 Vendors hurriedly remove their stalls from the roadway last Saturday. 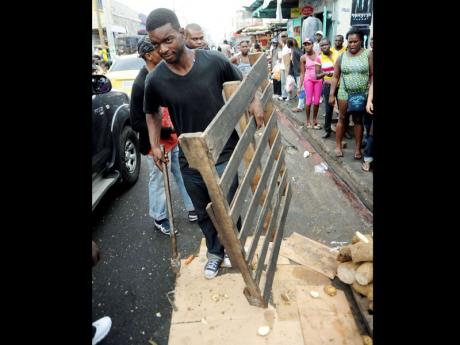 A KSAC member removes a pallet off the streets during a clean-up of downtown Kingston on Saturday. 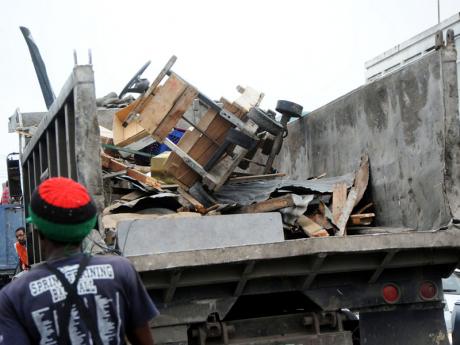 Items taken off the streets of Kingston during a clean-up of downtown Kingston. 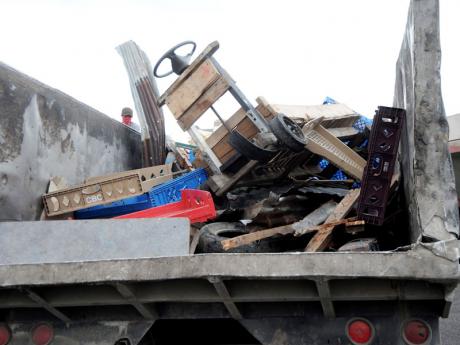 A seized handcart and other items used by vendors are placed in this KSAC truck during a clean-up of the streets of downtown Kingston last Saturday. - photos by Jermaine Barnaby/Photographer
1
2
3
4
5

THE KINGSTON and St Andrew Corporation (KSAC) has said it is prepared to ensure that downtown Kingston is on par with Vision 2030 and the clean-up of the streets is the first step in that direction.

City Inspector Alrick Francis said under the administration of Mayor Angela Brown Burke, the KSAC is on its way to achieving this.

"The mayor came up with an excellent strategy that we call the four Cs: citizen, community, council, and cash. And as the local authority, that governs the municipality. It's our job to make sure Kingston and St Andrew is up to par with the Vision 2030," said Francis.

He explained that the vision aims to make "Jamaica the place of choice to live, work, raise families, and do business, and so the vendors should not look at our operations from one angle as our aim is to make sure everyone is playing on a level playing field."

"Saturday's clean-up in downtown was just a start to what we have planned, and it's our job to make sure business is fair for the citizens. The business community of Kingston and St Andrew is secure for both vendors and customers, and we as the council will make sure that the cash made from all of this will be going back to developing the municipality," added Francis.

He continued: "From as early as 2001, we outlined both vending and no-vending areas, and so what we are doing now is just to level the playing field legitimately. It is unfair to vendors in the market who register with the KSAC and pay a market fee, while the other vendors are carrying out their business in a no-vending zone."

The clean-up operations, according to Francis, will not only give Jamaica a healthier environment, but make downtown a better place to do business.

According to Francis, the KSAC, in its operation, aims for the vendors to benefit as much as possible. He shared that downtown being the central point that it is, needs to be up to the best standard, and the KSAC won't stop until that is achieved.

"Last year, we tried to do our best for the vendors. We had a meeting at the Conference Centre and invited the National Housing Trust, the credit union, and other entities. We are showing them that we are looking out for their interest, and in doing so, we also have to look out for the citizens who come downtown to do business and shop," said Francis.

He added: "We have to create that atmosphere to achieve what the country is moving towards, and so we want people to understand that our operations are just for their and the country's best interest," he added.