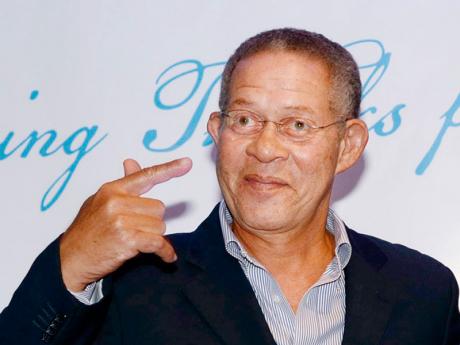 In joining the debate on fees and charges levied by commercial banks, former Prime Minister Bruce Golding has called for Jamaicans to be fair and avoid what he terms "sensationalism and populist tendencies".

Financial institutions have faced renewed heat from Jamaicans after an interim report submitted to Parliament by the Bank of Jamaica (BOJ) indicated that fee income, excluding those for loan processing, now accounts for the larger percentage of total revenue for commercial banks.

The report further highlighted that there has been a 30.8 per cent increase in the fee income of commercial banks since 2010.

While acknowledging that increased banking fees may add to the burden being faced by some Jamaicans, Golding said it should be recognised that the upward adjustments are a natural response to the economic climate which is also affecting financial institutions.

"A bank, like any other business must cover its costs if it is to survive, and make a profit for its shareholders if their investment is to be sustained," Golding said in a submission to The Gleaner.

He added: "Failure to do so imperils not just the shareholders, but the thousands of depositors that are the backbone of its business."

Golding, who acknowledged he too suffers from bank charges, said Jamaicans must also be mindful that banking services carry a cost.

He said a customer might object to being charged a fee for cashing a cheque or making a lodgment, but must remember that the teller who does the transaction has to be paid as well as the Jamaica Public Service Company, which provides the electricity for that teller to do the job.

Regarding concerns about non-interest income accounting for a large portion of the revenue of commercial banks, Golding said this was nothing new.

He noted that this was not peculiar to Jamaica and was consistent with the trend observed throughout the world.

"A paper prepared by the Bank of Jamaica's Financial Stability Department in December 2010 showed that non-interest income as a percentage of total revenue grew from 12 per cent in March 1999 to 29 per cent in September 2010," Golding pointed out.

He went on further to state: "The paper noted that there is a strong correlation between the increase in the share of non-interest income and periods of economic volatility during which interest income can fluctuate violently because of business failures, depressed economic activity and decreased demand for loans."

Pointing to 2011 data highlighting the portion of non-interest income in the total revenues of commercial banks, Golding said local financial institutions have been shown to be closely in line with what obtains in the region and, in some cases, far better than those in major markets.

The issue of bank charges

Mr. Fitz Jackson MP is to be commended for placing the issue of bank charges under parliamentary scrutiny. It is a fine example especially to our crop of young parliamentarians of how the chamber can be used effectively to ventilate issues of widespread concern.
The Bank of Jamaica must also be commended for submitting a fairly detailed report within the short timeframe provided. The need for more time to present a final report is well articulated and the justification pleaded is unassailable.
The imposition of new or increased charges to consumers, be it bus fares, water rates or chicken prices, almost always invokes howls of protest, especially in harsh economic times. The select committee considering the issue needs to be clinical and objective and its approach must be guided by empirical data and analysis rather than sensationalism.
There are some basic principles that must be put on the table:
•    A bank, like any other business, must cover its costs if it is to survive and make a profit for its shareholders if their investment is to be sustained. Failure to do so imperils not just the shareholders but the thousands of depositors that are the backbone of its business.
•    A bank carries huge overheads in order to meet the needs and convenience of its customers – a network of branches and the staff to operate them, equipment and technology, security, ATMs etc. These costs have to be met from its income.
•    A bank earns income from the interest it charges on loans, interest earned from deposits it makes in other entities and transaction fees. From this must be subtracted the interest it pays on customers’ deposits and savings as well as the cost of loan recovery and write-offs.
•    Banking services carry a cost. A customer may object to being charged a fee for cashing a cheque or making a lodgment but the teller who does the transaction has to be paid as well as JPSCo that provides the electricity for her to do what she is doing and the security guard who is there to deter the gunman from snatching the cash from her.
For many years, the government has been the banks’ principal borrower. The two debt exchanges have reduced the interest earned from government paper, directly impacting the income flow to the banks. The anemic demand for bankable loans has put pressure on the banks’ main income stream while leaving them with high operating costs. It is not surprising, therefore, that banks are strategically downsizing and are endeavouring (as part of the reason for increased bank charges) to force customers, instead of using the expensive banking halls, to utilize more technology-driven services such as ATMs, online banking and cashless transactions, e.g. bill payments.
The increasing share of bank charges or non-interest income (NII) in the total income of Jamaica’s commercial banks is not new. A paper prepared by the Bank of Jamaica’s Financial Stability Department in December 2010 showed that NII as a percentage of total revenue grew from 12% in March 1999 to 29% in September 2010. This is not peculiar to Jamaica but is consistent with the trend observed throughout the world. The paper also noted that there is a strong correlation between the increase in the share of NII and periods of economic volatility during which interest income can fluctuate violently because of business failures, depressed economic activity and decreased demand for loans. Banks worldwide have sought to reinforce their profitability by reducing their dependence on interest income. Banks are perhaps the businesses most sensitive to uncertain profitability because their survival depends so much on the confidence factor.
Fitz Jackson’s motion, quite correctly, sought to find out how local bank charges compare with those in other countries. It is difficult to make useful comparisons based on the actual dollar charges because these are affected by the volume of specific transactions that vary significantly in the basket of charges that obtain in different countries and from one bank to another. What can be meaningfully compared is the share of NII in total revenue country by country. My analysis based on 2011 data reveals that this ranges widely from a high of 78% in Chile to a low of 21% in Grenada. Jamaica, at 23%, is at the lower end. Within CARICOM, Jamaica ranks just above Grenada:

Of interest, also, are the figures for some of the major economies in the world:

Jamaica clearly is far from being out of line in this analysis.
An issue that Fitz Jackson’s motion does not address is the spread between the banks’ cost of funds and the interest charged on loans and advances. The Bank of Jamaica reports that the interest income of commercial banks for 2013 is $53 billion while interest expense (interest on customers’ deposits and savings) is $10 billion. That is a ratio of 5:1!. A look at interest rate spreads in CARICOM (World Bank 2012) places Jamaica above all the other countries:

Our banks will, no doubt, seek to rationalize that as “risk premium” and that involves issues of perception and psychology as much as hard facts.
Of course, any reduction in interest rate spread will force the banks into greater reliance on bank charges. The numbers eventually have to come together.
The fact is that interest income as the main source of commercial banks’ revenue is largely determined by the robustness of economic activity. The greater the level of economic activity, the more people earn whether by wages or profits, the more deposits and savings they make in the banks, the greater the demand for loans to put these deposits and savings to work and the more interest income the banks earn. Then, and only then can the banks’ reliance on fees and charges decline in relation to its total income.
Local commercial banks can also be expected to continue the transformation from traditional banking practices to more technology-driven services as a means of reducing costs. This will inevitably involve staff contraction but we cant have our cake and eat it.
The world is on the threshold of “mobile money” far beyond the likes of PayPal. Not long from now, we will be able to shop at the supermarket and pay our bill via our cellphone. The shopkeeper in Islington will be able to order his goods from the Kingston wholesaler and pay for them with his cellphone. The yam farmer in Warsop will be able to sell his yams to a Kingston supermarket and get paid via his cellphone. They will all have to be linked to a bank account somewhere and they will all pay a charge for this convenience but we must not lose sight of the mind-boggling opportunities that technology is rolling out and the banks are integral to this.
I hold no brief for the commercial banks. I, too, wrestle with these bank charges. But it is important that objective analysis trump sensationalism and our populist tendencies.