Criminal schools: Exploits of substance abuse in our school system 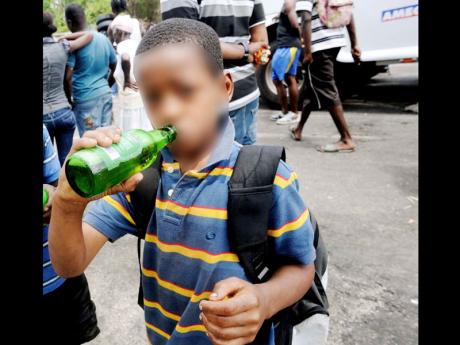 A boy drinks alcohol from a bottle looted from a delivery truck.-FILE

I have viewed with interest the developments surrounding the recent announcement by Minister of Education Ronald Thwaites concerning intervention in more than 50 schools as a measure to ameliorate crime.

I watched the contentious debate which arose about the use of the names of some of the institutions identified for immediate and urgent intervention in part, on the basis of the results of a Jamaica Constabulary Force-conducted survey in one of the island's prisons.

However, of most significance to me was just how quickly a carefully, and what I thought to be a well-constructed, plan for intervention on a critical issue requiring immediate attention became the side salad instead of the meal.

The snowball of responses which quickly drew us off track and centred the discussion where it was least constructive reminded me of Barack Obama's insightful statement on democracy: that "...what's troubling is the gap between the magnitude of our challenges and the smallness of our politics - the ease with which we are distracted by the petty and trivial ... our seeming inability to build working consensus to tackle any big problem". Though in our case it is not politics, the principle is still applicable.

The issue of crime and education is multifaceted, and one that will always demand an integrated/cooperative and informed approach if we are to achieve any measure of success. This approach has to draw together all affected and concerned parties and have a foundation in strong scientific/empirical evidence.

" Criminals are not born; they are formed - often by neglect or poor socialisation. The major positive environments in the formative process are school, church and/or family."

The crux of our problem and the very solution to this problem lie within this statement. Neglect (poor parental supervision), and socialisation into poor cultural norms and values, stand out among indicators which have been to the detriment of many of the nation's children.

The minister's rationale recounted that "a recent local study identified the links between the behaviour patterns of children and their later antisocial conduct and noted that both can most often be predicted from schooldays".

Jamaica has to face some hard facts, and I cannot resist inserting at this point evidence collected by the National Council on Drug Abuse (NCDA) and numerous other agencies that there are strong links between substance abuse, violence and criminal behaviour in school-age children.

Jamaica has a problem with substance abuse, specifically alcohol use among youth. Alcohol is the most used drug. Seventy per cent of teenagers drink alcohol and 24 per cent use cannabis (ganja). Eighty per cent had their first drink before age 14, with more than one-third of them being drunk more than once.

Drug use, generally, and alcohol use, in particular, is a significant risk factor for violence. Analysis of the data shows that 50 per cent of the students that used alcohol got in trouble with school authorities because of bad behaviour, including violent confrontations. There was also years repeated in school because of poor performance or substance abuse.

I hasten to make the point that the surveys were conducted in a cross section of high schools randomly selected, but the facts remain just as damning.

Some of the institutions named have, in fact, undergone significant transformation since the time survey participants would have attended.

However, the fact is that schools within inner cities or whose population comprise mainly inner-city youth are faced with migrant community culture (the social norms of the community invading the culture of the school), and young people who already have several challenges.

For these children, survival in and out of school is the life they know. There is no distinction between school life and community or home life. So norms like drinking, smoking and hanging out continue in schools as in the community. What was once a subculture is now emerging as the dominant culture.

What has been the NCDA's response to this? Collaboration with multiple stakeholders to design and implement intervention in schools for children as young as five years old who carry alcohol to school in Chubby bottles.

I believe it is critical for us to link the level of violence and criminal activity in the school-age population with the easy access to drugs and a significant level of experimentation among this age group. We are all aware that alcohol is easily purchased by underage drinkers through retailers and served to young people at many events that they frequent, as admittance/admission to events without identification occurs frequently (as communicated in the recent article in The Gleaner titled 'Busted: Parties breaching underage drinking stipulation'.)

So I, for one, welcome the minister's efforts at proactively tackling the problem. His plan to identify vulnerable youth early and to give resource and training in an effort to stem the tide of dropouts and interest in criminality should be appropriately considered.

Now that clarification has come and apologies have been made, let us engage the plan in a constructive way.