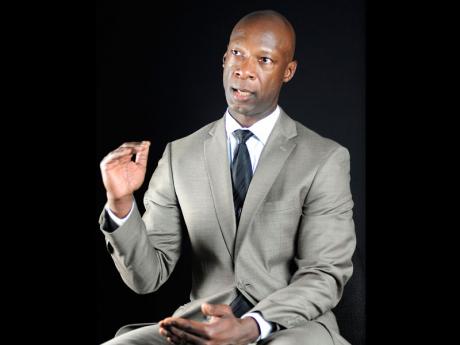 Clunis: I will never come here and say I have the solution for Jamaica … .Jermaine Barnaby/Photographer

On the face of it, there appears to be some harmony between Clunis' pronouncements and those of Owen Ellington, Jamaica's police commissioner.

Both police chiefs have expressed the view that community intervention is the way to go in breaking the back of crime and violence.

Clunis, who is in the country at the invitation of the Canadian High Commission, told The Gleaner yesterday that he had communicated his desire to assist in the search for solutions to Jamaica's crime problem to Ellington.

"I will never come here and say I have the solution for Jamaica, but I think we need to have the same kind of dialogue with the community, and I think you will come to the same conclusion," said Clunis as he drew parallels between Winnipeg and Jamaica.

Jamaica's murder rate increased by around nine per cent in 2013, over the previous year, while Winnipeg recorded a 16 per cent reduction.

"My philosophy is crime prevention based on social development, but me saying that is not enough," said the man who took on the role of police chief in November 2012. He is the first black person to occupy such a position in Canada.

Against this backdrop, Clunis said when he assumed office, he convened 12 forums across the city of Winnipeg.

"I engaged the communities in a series of meaningful dialogues and enquired of their needs," said Clunis. "Not a single community said they needed more policemen; they talked about socio-economic challenges."

Added Clunis: "Apart from looking at what's driving crime, a concerted effort from all segments of society saying we want the best Jamaica we can [is needed], just like we said we want to have the best Winnipeg we can."

Clunis said with such a focus, the Government, business, and citizens speak the same language.

"When you have that kind of movement taking place, it is difficult to stop, but it requires ground-level work."

He described as excellent the relationship between the citizenry and the police in Winnipeg, a far cry from the reality in Jamaica.

"We had a recent survey that showed more than 70 per cent of the citizens feeling that the force was doing an excellent job," said Clunis.

"That has been part of my drive … . I have said to my officers: 'I want you in the community when there is absolutely nothing happening. In good times, you get out, walk and talk with our citizens, so when something difficult happens, you have that foundation'," he explained.

While stressing that interfacing with the community was integral to effective policing, Clunis said he opted to mirror that principle by meeting with his law-enforcement personnel.

"I model that first within the organisation, so I got out and had 19 forums with our membership, so every officer and civilian member had the opportunity to speak with me face-to-face. You have to have that relationship," he stressed.

He said he believed such a strategy would be effective in Jamaica.

"I think people are people no matter where you might find them. Everyone wants to have a hope in and vision of a good socio-economic position … . Those are some basic needs that people have, so I truly believe that would work here."