How fast will KC go? 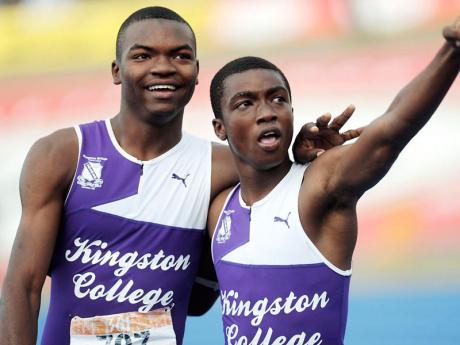 Fans of high school track and field are in heaven. Whether they congregate in Kingston for the Camperdown Classic or make tracks for Montego Bay and the Milo Western Relays, there will be fun for all. Those who go to Montego Bay may start getting answers to one of 2014's big questions.

Kingston College (KC) destroyed the Boys and Girls' Championships record books last year in Class Three with Nathaniel Bann and Jhevaughn Matherson doing most of the damage. When they joined forces on the 4x100 metre relay, the result was just as astounding. KC connected to an amazing time of 42.36 seconds. The old mark was 43.04.

Fast forward to 2014. KC unveiled Akeem Bloomfield and he has been speeding. He and Matherson jointly hold the fastest Class Two 100m metres time at 10.64 seconds and the tall newcomer has run 21.87 for 200 metres.

Bann has already broken 50 seconds in the 400 metres. Add him and the returning Roje Fearon to the mix and KC have a potentially super-fast team in the Class Two sprint relay. Fearon was painfully cut down by injury at the 2012 Gibson Relays.

HOW FAST CAN YOU GO

Every track and field fan wants to know how fast they can go and the Western Relays might begin to furnish some answers. In consecutive seasons, Jamaica College have controlled Class Two sprint relay running. So while 42.36 is still very respectable for that Class Two, JC set three 4x100 records in three years - 41.21, 40.75 and 40.54 seconds.

After the twin 10.64 clockings by Bloomfield and Matherson, most fans believe KC will roll past 40.54 at Champs. The Catherine Hall complex, home of the Western Relays, will bear witness to this team's speed.

The MVP Track Club has gone to those Relays for years and fans there can expect to get a look at double World Champion Shelly-Ann Fraser-Pryce and World bronze medal winner Nesta Carter. That's always a highlight in Montego Bay. However, the question on everyone's lips is how fast will KC go in Class Two?

The Western Relays Class Two record is 41.87 by Wolmers' Boys last year. That mark is on death watch.

Whatever Bann, Bloomfield, Matherson and company achieve in the Catherine Hall complex, it will be a prelude to another question - how fast will KC go at Champs?

HUBERT LAWRENCE has attended Champs since 1980.