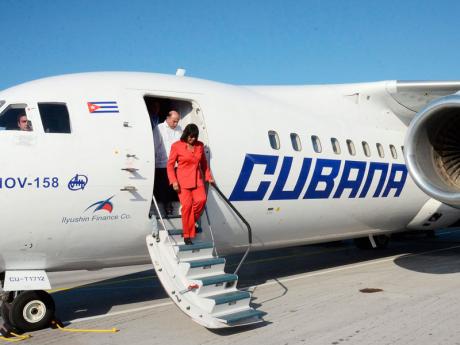 Prime Minister Portia Simpson Miller is escorted by Cuban Chief Protocol Miguel A. Moreno Carpio as she descends the steps of the Cubana aircraft on her arrival at the José Martí International Airport in Havana, Cuba, on Sunday, January 26. The prime minister was on a four-day official visit to the Spanish-speaking Caribbean country. - JIS Photo

Prime Minister Portia Simpson Miller yesterday told a contentious sitting of the House of Representatives that her administration spent a total of $117.825 million on travels for Cabinet members between January 1, 2012 and December 31, 2013.

Simpson Miller was not able to contain her anger as she disclosed that $15.15 million was spent on her 25 overseas trips over the two-year period, with another $30 million for staff members of the Office of the Prime Minister, which she heads, with six trips not generating any expenses.

The question-and-answer session in the House started out as an intriguing sparring matchup between Opposition Leader Andrew Holness, who had tabled questions concerning the prime minister's overseas trips weeks ago, and Simpson Miller.

The exchange quickly descended into a shouting match, with Holness losing his cool and the vast majority of parliamentarians joining the fray.

It was clear that Simpson Miller was edgy from the outset, as she sought to address Holness' queries, complaining as she got to her feet, that she was not the only leader who travels while in office.

"It started out when I was prime minister (2006-2007) and did not continue until I became prime minister again," Simpson Miller declared, suggesting that she has always come under attack on this issue.

The anticipation of the long-awaited response by the prime minister to an issue that had triggered raging debate in the public domain for months was palpable.

Simpson Miller's presentation was initially heard in uncharacteristic silence as she produced answers to the questions as well as voluminous documents containing data to corroborate her verbal presentation.

All this changed as government members rushed to offer protection to Simpson Miller when Holness rose to fire supplemental questions at her.

The noisy reactions from the government benches elicited a complaint from Leader of Opposition Business Derrick Smith and was vociferously supported by opposition member Desmond McKenzie.

The House descended into noisy confusion as Speaker of the House Michael Peart noted that the noisy interruptions were not confined to one side, but that seemed to stir the bulk of the parliamentarians on both sides.

Holness, who repeatedly asked Simpson Miller to enunciate the economic benefits derived from each visit, lost his cool when the heckling intensified.

Simpson Miller said all the trips, with the exception of those associated with funerals she attended, including those of apartheid giant and former South African President Nelson Mandela, as well as the late Venezuelan President Hugo Chávez, had engendered economic or other benefits to the country, but she did not elaborate.

The gamut of emotions gushed to the fore as government members heckled and deafening rejoinders from furious opposition members sparked fury.