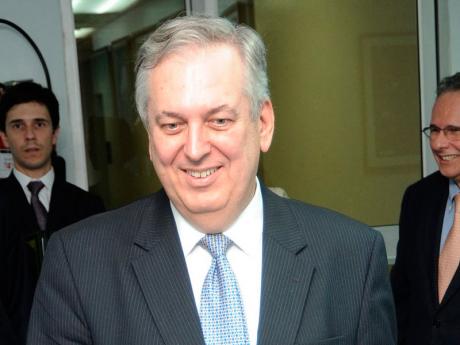 THE PATH to Brazil - the 2014 football World Cup venue - is to be made hassle-free for Jamaicans with the pending signing of an agreement between the governments of both countries.

A new reciprocal agreement to eliminate visa requirements for Jamaican and Brazilian nationals to enter both countries is in the pipeline, even as the two countries yesterday consolidated the establishment of the Joint Jamaica-Brazil Commission aimed at deepening diplomatic relations.

Brazil's Foreign Relations Minister Alberto Figueiredo Machado hinted in an exclusive interview with The Gleaner that the visa requirement is likely to be eliminated and the agreement, which was in an advanced stage, was near finalisation.

Machado, who is on a working visit to Jamaica, told The Gleaner ahead of yesterday's signing of three other agreements, that Jamaica's tourist product also stands to benefit significantly from the pending non-visa arrangement.

Machado, who worked in Jamaica on the Law of the Sea Conventions in the 1980s, characterised as excellent relationships between the two countries as both shared many similarities.

He said that Brazil was one of the first countries to have recognised Jamaica's attainment of Independence in 1962, with his compatriots remaining great admirers of Jamaica's athletes and musicians, among other things.

Machado told The Gleaner that Brazil's assistance to the Sickle Cell Unit at the University of the West Indies (UWI) will benefit both countries as it will be transformed into a research centre as well.

Jamaica's Foreign Affairs and Foreign Trade Minister A.J. Nicholson yesterday said attention was paid to the greater role of cooperation in the field of energy, with particular emphasis on the role of bio-fuels as a key instrument of sustainable development, as well as the strengthening of and support to Jamaica's Sickle Cell Programme.

Just before the Brazilian minister toured the Portmore Heart Academy, which his country was instrumental in transforming, Nicholson expressed appreciation for the contribution, through the Brazilian Cooperation Agency, ABC, and the National Service for Industrial Training, SENAI, and their cooperation with the HEART Trust National Training Agency.

This, Nicholson said was accomplished under the Brazil-Jamaica Centre for Professional Training project, which led to the establishment of the HEART College of Construction Sciences at the Portmore HEART Academy.

The minister also put his signature beside that of Machado's at the inauguration session of the Jamaica-Brazil Joint Commission in Kingston.