Terror in the east: Rockfort residents living in 'hell' 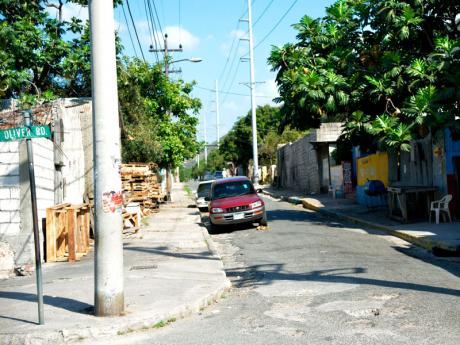 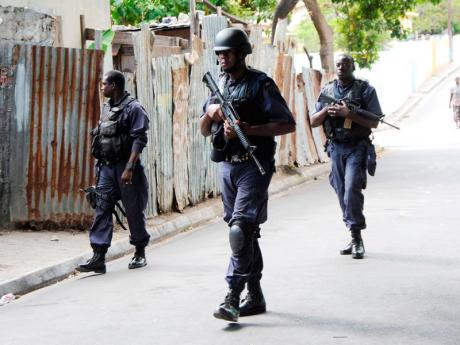 Police on patrol along Banana Street in Dunkirk yesterday after two shooting incidents in the area.-Jermaine Barnaby/Photographer 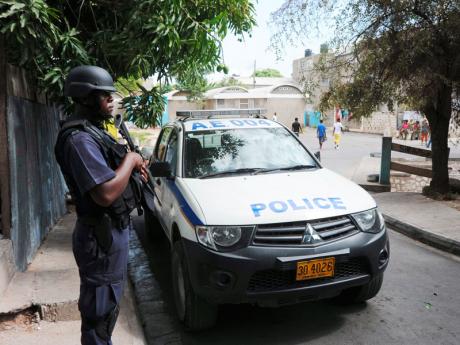 Oliver Road is one of the main roads into the east Kingston community of Rockfort, and for many of the residents in the area, it is "the road to hell".

Homeowners are forced, at gunpoint, to pay criminals thousands of dollars rent for living in their own homes, and men from outside the community who move in for common-law relationships with women from the area must pay the criminals $15,000 per month.

If the men are unable to pay, they have to move out.

Oliver Road is like any other road in an old residential community. The neatly lined-out buildings, made of concrete with zinc roofs, are run-down, and many are terribly in need of a coat of paint.

The majority are owned by occupants, with a splattering of tenants. But with lawlessness and extortion on overdrive, the community has dwindled into a ghost town with the few who are unable to leave at the mercy of the gunmen, despite the efforts of the police.

"Oliver Road is straight to hell. It's a ghost town in daytime and night-time. The gunman dem just lie down at the top of the road, with their big guns, just shooting - shooting at anything. Even if they are playing among themselves, they are shooting. Life is worth nothing," was the sad conclusion of a victim of the terror being waged by members of two criminal gangs in Rockfort.

"They fire gunshots over your heads just for fun to intimidate you. Imagine that!" added the resident, who has moved out of the community.

But head of operations in the Eastern Kingston Police Division, Deputy Superintendent Hornet Williams, says the police are patrolling the streets of Rockfort 24 hours each day and are determined to ensure that the residents can live in peace.

He says the police have heard about the criminals demanding rent from residents, but the residents are not doing enough to help the cops.

"Only last week, we arrested three men who, our information indicate, are involved in this crime, but we had to let them go because nobody would come forward with a complaint.

"We have said to residents, 'Come to us and report it if you are a victim, and we will act on it and protect you'," declared the cop.

But that is not enough for scared residents, who hark back to a time when two strongmen ruled the community.

"Is not like when George Flash and Tony Brown used to run the place. They controlled things, but not in the criminal way these operate. Any kind of abuse under Tony and George was dealt with.

"If a man must get beaten for abusing a woman, or abusing a child or robbing old people, that would happen. But they never forced anyone to be part of a gang. Dem gunman here come into your house and tell your family that 'War a gwaan, choose side'," said the resident, who fled the community after the gang members said a minimum of $15,000 per month must be paid to them for rental for a house the family had owned in for decades.

George Flash and Tony Brown (both now deceased) were two east Kingston enforcers during the 1970s aligned to the People's National Party (PNP), and who became notorious in Rockfort.

Flash died from cancer and Brown from a diabetes-related illnesses.

"God knows, it better when Tony Brown was running the place. There were rules. Dem bwoy yah just come with guns any time, and if they kill somebody, they tell you that 'You see so and so, a we just kill him. Go tell the police say we tell you that. A dat a go happen to you if you don't pay.'

"Many have to flee and criminals just come in, take their furniture and rent out their houses. This is lawlessness. How must people live like that?" was the question asked with hopelessness.

"The gunmen shoot out the street lights. Our children go to school but they take cover more often than they are allowed to play.

"The area is a PNP area, but everybody missing. Member of parliament (MP) missing, councillor missing. But even if them come, nothing will change. Dem bwoy nuh fraid a nobody - neither police nor politician. Right now, I just want to get rid of them, by any means," was the sad conclusion.

Today, the political leaders and members of the religious community will engage in another peace effort - a walk through the community.

A news release from the Rockfort Development Council said among those walking through the community will be the church fraternity, MP Phillip Paulwell, Councillor Angela Brown Burke, and National Security Minister Peter Bunting. It will start at 2:30 p.m.