Are you a gangster? Anti-gang bill passed in House 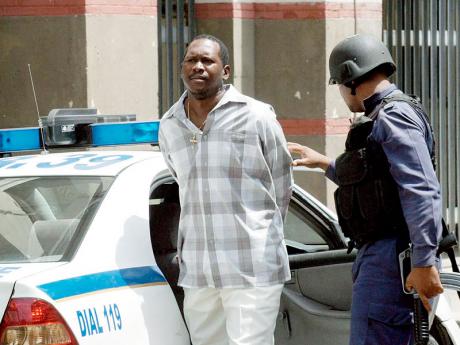 Formerly Jamaica's most wanted, Joel Andem, being escorted by a policeman before his appearance at the Gun Court in downtown Kingston on June 17, 2004. - file

THE POLITICAL divide in Gordon House yesterday coalesced as parliamentarians signalled their unanimous support for The Criminal Justice (Suppression of Criminal Organisations) Act 2014 (anti-gang bill), which the Government has crafted to dismantle criminal organisations.

Members of the House of Representatives passed the far-reaching piece of legislation with 22 amendments after a spirited debate.

In an impassioned plea to his colleagues and the country to rally behind the tough new statute, Attorney General Patrick Atkinson declared: "This society is tired of gangsters ... . It is not just any informal group of young persons; it is this criminal organisation."

He said the disruption andsuppression of criminal organisations is fundamental to solving the country's violence problem. "If we do not do it, we are lost as a people," he added.

The attorney general made it clear that the proposed law would not exist in isolation as it was subject to the supremacy of the Constitution and the supervision of the court.

Delroy Chuck, former justice minister, in his contribution to the debate, challenged his parliamentary colleagues to dispense with political capital in order to dismantle criminal gangs.

"In this Parliament, some of us, all of us, will have to be prepared to give up some political capital to dismantle some of these garrisons. I think that we are never going to fully break up the gangs until we agree, between us, both sides and all politicians, that we must free the minds of our members in our communities so that they respect how others exercise their vote."

He warned against the "fostering" of corner crews, noting that these are the same persons who "come back after the election to demand of us, and it is very difficult for us to say, 'Go about your business'".

While Chuck addressed his colleagues, some disagreed, saying, "Speak for yourself."

Chuck noted that even though the criminal gangs were not created by politicians, they thrived in political garrisons.

He urged the security forces not to go net-fishing when implementing this law, but to use intelligence to target criminal organisations.

West Kingston Member of Parliament Desmond McKenzie urged National Security Minister Peter Bunting, who piloted the legislation, to tackle the importation of drugs and guns, which, he said, helped to fuel gang activities in the country.

Both McKenzie and Dr Horace Chang want the administration to create greater opportunities for young people and to increase social programmes in the inner city.

"We have to find a way to ensure that justice can be attainable. It must not be perceived now, as it is in the inner city, that you have to have big money to find justice. We have to change that. If we do not change that, we will be coming here in three years' time to look at how we can toughen the law," he said.

In closing the debate, Bunting addressed detractors of the anti-gang law, saying that many changes had been made since the bill was first promulgated.

"This bill is not a panacea, but it is a significant step forward."