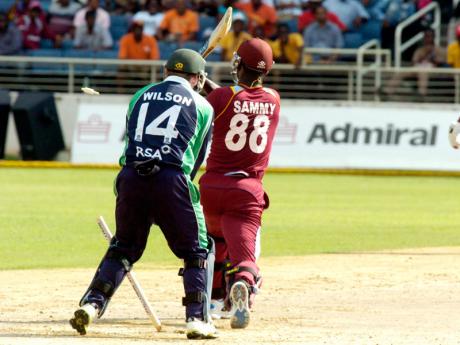 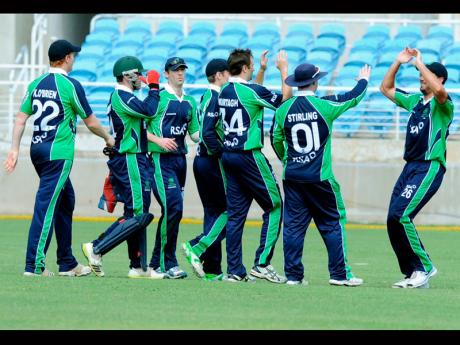 Members of the Ireland team celebrate the wicket of Chris Gayle during yesterday's Twenty20 International against the West Indies at Sabina Park. Ireland won by six wickets. - PHOTOs by Ian Allen/Photographer 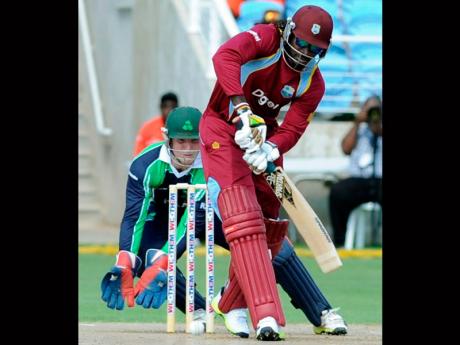 Chris Gayle (foreground) plays a shot during the West Indies' six-wicket loss to Ireland in their Twenty20 International at Sabina Park yesterday. Looking on is Ireland wicketkeeper Gary Wilson.
1
2
3

West Indies opener Chris Gayle made a top score 18 in Wednesday’s first Twenty20 match against Ireland at Sabina Park. Yesterday’s match report and scoreboard had incorrect scores for the batsman. We regret the errors.

Nonchalant batting was the order of the day for the West Indies, who went down to a shocking six-wicket defeat to Ireland in the opening game of their two-match Twenty20 International series at Sabina Park yesterday.

West Indies, who won the toss and elected to bat, posted a pedestrian 116 for eight off 20 overs with returning opener Chris Gayle, making a topscore of 16.

Ireland, in their chase, coasted to 117 for four with five deliveries remaining, which represented the first time they were getting the better of West Indies in a Twenty20 International.

Playing his first game since November last year when he injured his hamstring, Gayle and the recalled Dwayne Smith started the West Indies innings fairly brightly with a boundary-filled opening stand of 31 inside the first five overs.

It, however, came to an abrupt end after 4.2 overs when Smith, looking to hoist pacer Timothy Murtagh, was caught at deep mid-wicket for 14.

Another returning-from-injury player, Marlon Samuels, joined Gayle at the crease; however, whatever hopes they had of boasting a big Jamaican-duo stand were dashed seven balls later when Gayle, lofting lazily a good-length delivery from seamer Alex Cusack, was caught close to the long on boundary with the score on 38.

Gayle hit three fours during his vigil, which lasted 19 balls.

Samuels was then joined by Lendl Simmons. However, with the two failing to get into top gear, the score crawled, and when the former was outstumped with the score on 58 for three off 10.2 overs, it signalled that the team might be in for a less-than-ideal score.

And, so it was. The rest of the middle and lower order batsmen came and went in a similar manner to that of a funeral procession with all-rounder André Russell, who made a run-a-ball 15, being the only one of the last batsmen to take to the crease getting into double figures.

Dwayne Bravo, who was gobbled up at third man off a lose one-handed top-edged shot, which pretty much summed up the batting performance, made eight off 14 balls, while captain Darren Sammy seven off eight and Ramdin four off two.

Off-spinner Sunil Narine and leg-spinner Samuel Badree finished not out on six and three, respectively.

The 22-year-old Tim Murtagh, playing in his fourth Twenty20 International, 33-year-old all-rounder Alex Cusack, a veteran of 26 Twenty20s, and their most high-profile player, batting all-rounder Kevin O'Brien, ended with two wickets each.

Best known for upset acts at the last two ICC World Cups where they defeated Pakistan in 2007 and England in 2011, the Irish, then went about their victory pursuits in a rather impressive manner, as after losing their first three with the score on 37 in the seventh over, they consolidated thereafter.

Leading the way was number-three batsman Ed Joyce, who after missing the regional Super50 tournament in Trinidad showed his ability with an unbeaten 40 off 49 balls.

He hit two fours during his innings, but it was the way in which he manoeuvred the West Indies bowling attack with his team needing just about a run ball that would have won him kudos from the fair-size gathering.

Joyce was supported by Andrew Poynter, who, playing his sixth Twenty20, made 32, and number-four batsman Gary Wilson, who made a run-a-ball 18, which included three boundaries.

Samuel Badree, who opened the bowling, and bowled out his four overs straight, took two for 18 to emerge as West Indies's bowler with Sunil Narine, one for 16 off four, and fast bowler Ravi Rampaul, one for 27 off 3.1 overs, took the other wickets to fall.

Game two will be played tomorrow at the same venue, with teams also slated to play a one-off one-day international on Sunday, also at Sabina.