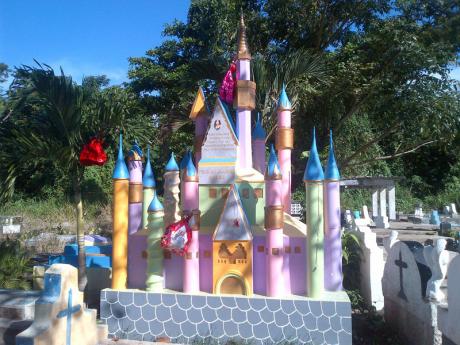 This newly constructed 'diamond castle' in the Annotto Bay Cemetery in St Mary is creating quite a stir among passersby, and perhaps among the dead. - Photo by Paul Williams 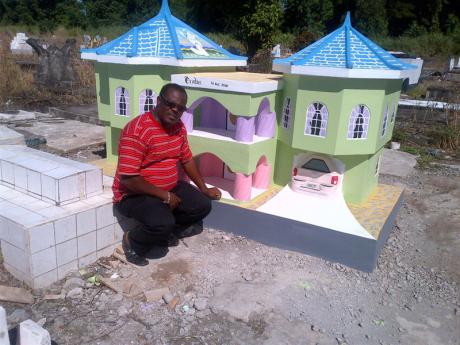 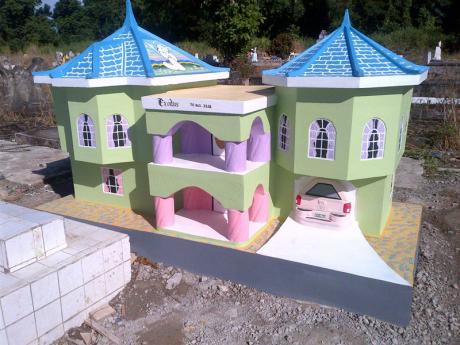 Beryl Hamilton died in 1997, but she recently got herself a brand-new 'mansion' and Escalade in the Annotto Bay Cemetery in St Mary. - Photo by Paul Williams 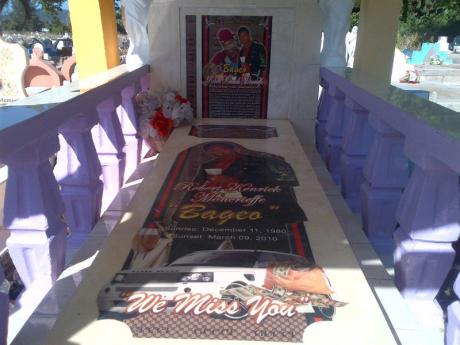 These creative posters on Robert Kenrick 'Bageo' Moncrieffe's canopied tomb in the Annotto Bay Cemetery in St Mary say much about the type of person he was. - Photo by Paul Williams 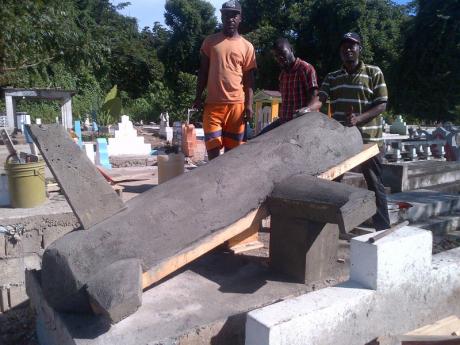 Masons Burchell Salmon (left) and Mervin Davis (right) of St Elizabeth are hired by Exodus Funeral Services in Annotto Bay, St Mary, to construct artistic tombs. Here they are being assisted on Wednesday by Ricardo 'Buzumy' Bennett, of Annotto Bay, with this 'airplane' in the process of taking off. - Photo by Paul Williams 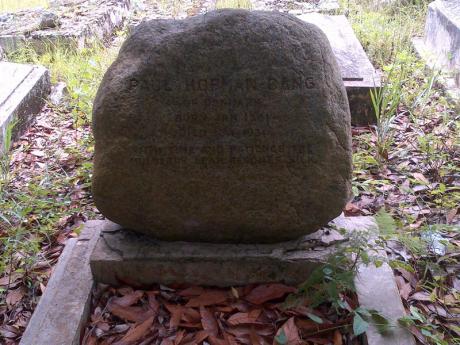 Paul Hofman-Bang of Denmark didn't go for the extravagance. He got himself a simple, but creative headstone in the cemetery of the St George's Anglican Church near Mile Gully, Manchester. - Photo by Paul Williams 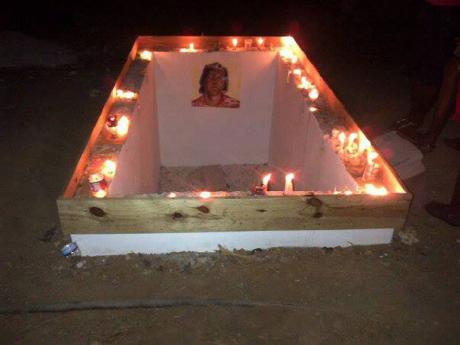 Every aspect of our lives influences art, and as humans, we are intuitively artistic. Nothing about us, our clothes, food, dwellings, and even our bodies, is untouched by our art. We are always designing and creating, sometimes subconsciously. In essence, life is full of art, but as the Latin maxim, ars longa, vita brevis says, life is short, but art is long.

But, for some of us, when we make the transition from this short, artful life, the longevity of art follows us to our graves where we spend the afterlife surrounded by or enshrouded by art. Yes, while some people are buried without anything to mark where their remains lie, there are others whose eternal abodes are quite outstanding because of the magnificent work of funerary art that they are.

Funerary art is any piece of artwork that forms part of the resting place of the dead or that is placed within their graves. It may be part of a cultural ritual or it may be a symbolic representation of the life and/or persona of the deceased, or it may be a mark of respect or endearment. And from time immemorial, man has been making elaborate tombs to mark the final resting places of their loved ones.

All over the world, there are artistic tombs that are quite gaudy, wondrous, flattering, or even mind-boggling. The most ancient of the elaborate tombs is the burial mound at Newgrange, Ireland. It is 250 feet across and 40 feet high, and has a tunnel that goes to a burial chamber that has a ceiling made of massive interlocking stone slabs. At the entrance, there is a big sculptured rock.

The 'City of the Dead' in Northern Ossetia, Russia, is a little village in which the homes are occupied by well-dressed, mummified people. Another 'city of the dead' is the Giza Necropolis in Cairo, Egypt. It consists of the great Pyramid of Giza, the tomb of Pharoah Khufu; the Khafre Pyramid; the Pyramid of Menkaure; the Sphinx statue; and many
others.

Egypt also has the Valley of the Kings, a
cemetery full of pharaohs who were buried among much opulence in
elaborately decorated tombs, the most famous of which belongs to King
Tutankhamun. Another funerary abode for monarchs is the classic gothic
church, Westminster Abbey in London, England, where British monarchs and
royalty, aristocrats and monks are entombed. Among them are some
notable poets, writers and scientists.

The most
magnificent tomb, a mausoleum, built by any one person for another is
the Taj Mahal, built in 1632 in Agra, India, by the devastated Mughal
Emperor Shah Jahan for his wife, Mumtaz Mahal, who died during
childbirth. The mostly marble structure has precious and semi-precious
gemstones laid into the carved marble panel walls. Shah Jahan himself is
resting in the tomb, where their caskets are adorned with
gems.

To support him in the
afterlife, the first emperor of China, Qin Shi Huangdi, was buried in an
underground mausoleum in Xi'an, China, with nearly 8,000 life-size
soldier statues called the Terracota Army. Statues are also part of the
burial rituals of the Toraja people in Sulawesi, Indonesia. But the ones
created are of the deceased, who are buried in caves carved into rocky
cliffs. Carved wood effigies called tau taus bearing the image of the
deceased are put on balconies of the tombs to stand guard over their
remains.

In the Capuchin Catacombs of Palermo, Italy,
mummified bodies were dressed up in everyday clothes and displayed on
monastery walls as art to be beheld. Displaying the remains of the dead
artistically also takes place in the Sedlec Ossuary, situated in a Roman
Catholic Chapel in Sedlec, Czech Republic. It consists of about 40,000
bones that serve as decorations, furniture and
chandeliers.

Right here in Jamaica, where extravagance
is not lost upon us, there are many eye-catching tombs all over the
country, but the one that people will be talking about, more than any
other for now, is the 'Diamond Castle' tomb built over the remains of
19-year-old Khadijah DeAndrea McKenzie. This colourful, multi-level
structure nestled between two replanted palm trees is a massive standout
in the Annotto Bay Cemetery in St Mary, where it can be seen from the
main road.

Below a
picture of the deceased, the inscription says, "Sleep my beautiful
diamond on your pillow in the sky. Diamonds are forever, so we'll never
say goodbye." McKenzie died in car accident in December in the United
States. When The Sunday Gleaner visited on Wednesday,
remnants of Valentine's Day decorations were still blowing from the
spired columns.

Nearer to the road was another
colourful structure, a two-storey 'mansion' with an 'Escalade' in a
garage. The builders, Burchell Salmon and Mervin Davis, were in the
process of completing an 'airplane' atop another grave. They were
brought to St Mary from St Elizabeth by the operator of Exodus Funeral
Services, Errol Green, to put some life into the very drab
cemetery.

The tomb, then, doesn't have to be boring
and uninspired; it can come to life with some amount of grave
art.