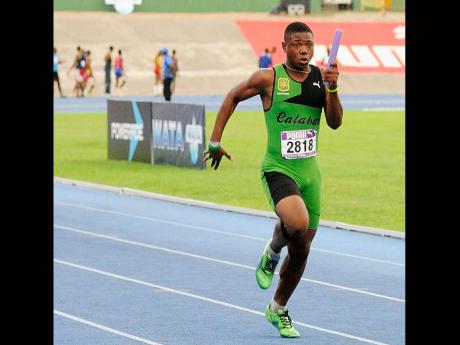 WHEN Jamaica College (JC) set a new record of 43.31 seconds to win the boys' Class Three 4x100 metres at Gibson Relays in 2011, many thought that record would have stayed for a long time, but last Saturday inside the National Stadium the thousands of fans saw something extra special.

In the heats of the event, a star-studded Calabar High team erased the JC record, going sub-43 seconds in 42.60.

What happened in the final was even more astounding as the quartet of Tyreke Wilson, Michael Stephens, Christopher Taylor and Djour Russell did what appeared impossible.

The Michael Clarke-coached boys took the Class Three 4x100 metres to a new horizon with an amazing 41.83 seconds.

By virtue of this scorcher, the team was awarded with the Neville 'Teddy' McCook Trophy for the most outstanding achievement of the meet.

Head coach of Calabar, Michael Clarke, who is also a national senior team coach, was surprised by his Class Three team's achievement.

"I am in shock and this is really unbelievable as I didn't see this coming ... I am happy for the boys and I am blessed to know that I had something to do with this. I am also happy to see a new era in Class Three relay sprinting," he said minutes after the outstanding feat.

It was a record-breaking day for the team coached by the wily Clarke, as his two top athletes, Javon Francis and Michael O'Hara, were on two other record-breaking teams. Only this time, Clarke was not surprised.

"Although I was surprised by the feat of the Class Three team I was not with the others as I knew they had the capabilities to do so and leading up to the Gibson Relays, based on their form I knew it was possible," he said.