Simpson to know fate on April 8 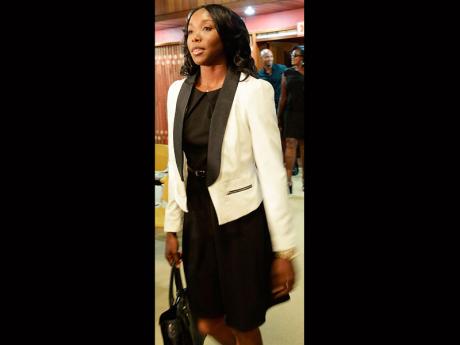 Sherone Simpson will know on April 8 whether she will be banned for two years for failing a drug test for the stimulant oxilofrine at the National Championships last June.

That is the maximum sanction allowed for first-time offenders, and Lackston Robinson, the attorney representing the Jamaica Anti-Doping Commission, believes she should serve the time.

During his two-hour-long final submissions in the case against the 2008 Olympic 100-metre silver medallist, Robinson described the 29-year-old veteran as grossly negligent, her agent Paul Doyle as disingenuous and the lab report tendered by Simpson witness Professor Wayne McLaughlin, as unreliable.

He told the disciplinary panel comprising Lennox Gayle, Peter Prendergast and Dr Japheth Forde that the actions of the athlete were "far removed from the standard of care required to satisfy rules 10.4, 10.5.2 and 10.5.3 of the World Anti-Doping Agency's (WADA) Code.

Those rules speak to the elimination or reduction of sanction of the period of ineligibility for specified substances under specific circumstances, the elimination or reduction of period of ineligibility where an athlete is found to be of no significant fault or negligence, or has provided substantial assistance in discovering or establishing anti-doping rule violations, respectively.

Robinson, who cited several prior cases as reference during his submissions, said Simpson failed to identify the source of the prohibited substance as anything she took that contained the banned stimulant. Reading from her testimony given during the hearing that began on January 7, Robinson established that Simpson, in response to questions about what could have caused her to return an adverse finding, said that "anything we had done different was

taking the supplements that Chris (Xuereb) gave us".

The JADCO attorney said Simpson did not know where Xuereb obtained the supplements, nor did she show any concern. When asked if she was concerned about where the supplements came from, Robinson remarked, she said "no".

Briefly turning his attention to Simpson's agent, Paul Doyle, Robinson said his statements in the hearing relating to their actions following news of the adverse findings were inconsistent. Doyle, he said, told the panel that it was because of his actions and that of his athletes why the United States Anti-Doping Agency (USADA) put the supplement Epiphany D1 on their list of high-risk supplements. But according to Robinson, the supplement was added to the list on September 12, 2013, but Doyle only received the lab report from HFL Sports Science, the lab that conducted tests on the supplement believed to be responsible for the athlete's adverse finding on September 30. So they could not have been the ones who provided USADA with the information.

As for the lab report itself, Robinson said the sample bottle provided by Doyle to HFL was markedly different from the one the lab ordered online to be the standard for the lab test. He said the bottle of Epiphany D1 Doyle sent to the lab had a plastic seal over the cap. There was a second seal inside, and when that was removed, there was a rock-like substance found, the capsules and then cotton covering the bottom of the bottle. However, the bottle of the supplement bought online was completely wrapped in plastic and inside after the seal of the top of the bottle was broken, there was no rock-like substance, and the cotton was above the capsules not beneath them. Of great importance, Robinson noted was that it was the bottle that Doyle provided that contained oxilofrine, not the bottle that was purchased online.

As it related to the samples of the supplement seized by police while the athletes were in Italy, Robinson said Simpson made no effort to obtain a sample from the police for testing, nor did she disclose to the doping control officer who tested her at the National Stadium last June that she was taking the supplement.

Earlier, Simpson's attorney, Kwame Gordon, in his hour-long submission, stated that his athlete, while admitting to some negligence, did enough to deserve a lesser sanction under the applicable rules of the WADA Code. Saying that the only thing his client was guilty of was that she made a mistake, Gordon said Simpson cooperated with authorities and they had samples of the supplement to be tested to establish that it contained the offending stimulant.

She was "very open, very transparent and engaged the authorities. She was not trying to hide anything", Brown said.