No life for an old horse - Once-prized animals abandoned, left for dead after retiring from racetrack 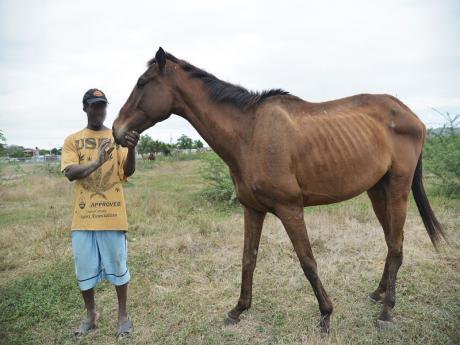 A resident points to a horse he says was abandoned in bushes in 'Fourth World'. 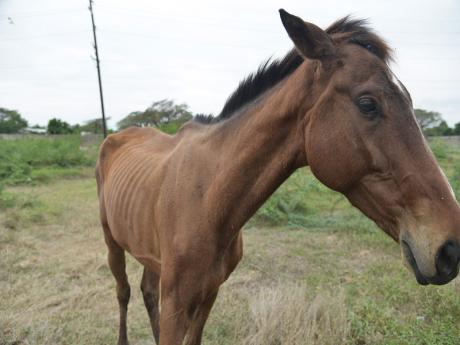 At death's door is this horse, which was reportedly abandoned in a section of Waterford.
1
2

More and more moneymaking racehorses are being abandoned and left to die by their owners once they are no longer able to compete on raceday.

A Sunday Gleaner probe, supported by the Thoroughbred Owners and Breeders Association (TOBA) and the Jamaica Society for the Prevention of Cruelty to Animals (JSPCA), has confirmed that some horses, purchased for millions of dollars and prized during their racing careers, are abandoned and left to fend for themselves once they can no longer keep up with the demands of raceday.

Last week, the JSPCA and the TOBA found common ground as they condemned the abandonment and poor treatment of retired racehorses.

The two bodies bemoaned the fact that some racehorse owners have been leaving once-prized horses to roam the streets, while other horses are being left to starve to death in stables.

While the number of racehorses abandoned in recent time is unavailable, there is a big dispute on whether the situation is getting better or worse.

President of the Jockey Club, Hugh Levy, says the situation caused his organisation to establish a fund to deal with abandoned horses, but over the past three years, the problem has not been as great.

But other major players in the racing industry say the problem has worsened in the past four years, since the Kingston Polo Club stopped taking old racehorses and the Mounted Police Division has reduced the number of horses it takes each year.

President of the TOBA, Howard Hamilton, told The Sunday Gleaner that the expenses involved in the care of retired racehorses have driven many owners to abandon the animals once they outlive their profitability.

"What has been happening is that if the horse is not winning or performing to some of these owners' satisfaction, they just forget about feeding it and leave it to roam all over the place, and the JSPCA just cannot cope with the numbers of abandoned horses, " said Hamilton.

He argued that the country's harsh economic climate is a contributing factor.

"It is becoming more and more difficult as the cost of feed has increased tremendously with the devaluation of the Jamaican dollar. A bag of feed which once cost $800 is now costing as much as $2,000, so it's difficult for some of them (racehorse owners) to continue feeding animals that are not making any money," Hamilton said.

He noted that there are other factors contributing to the high cost of maintaining racehorses.

"You have to look at things like supplements, hay, bedding materials, veterinary visits and the shoeing of the horse, those could total more than $80,000 a month," added Hamilton, even as he noted that the cost would be significantly reduced for horses which are no longer racing.

Hamilton was supported by Dr Paul Turner, chief veterinary officer with the JSPCA, who said his organisation had been called to rescue a number of abandoned horses.

"In November of last year, we had to rescue about four horses in the Gregory Park area of St Catherine. [We sought] the assistance of the police to put some of them down because of the condition they were in," said Turner.

He noted that while mares and stallions could go on to breeding after their racing days were over, geldings, which had been neutered to enhance their attentiveness to racing, fared much worse.

"A few of the champion racehorses will go to some racing schools, while a few go to the Mounted Police, but for the majority, there is nowhere for them to go. You have to understand the costs to maintain these animals is quite expensive, and that's when you find them abandoned or locked up in the stables to starve to death," said Turner.

He charged that some horses had been mutilated by their owners in an attempt hide their identities.

"What they usually do is to use sandpaper to remove the tattoos that identify the owners. They don't care about the animal or the pain of the animal. It's all about protecting themselves."

Last week, our news team was taken to one of the horses which persons claimed had been abandoned by its owner in bushes in an area of Waterford called 'Fourth World'.

"This is where they abandon many of the horses," one resident claimed, as he pointed to an animal whose body made it clear that it had seen better days, while the lips looked as if the identify marks had been removed.

"Is me have to use tyre and burn them bodies when them dead," added the resident, while pointing to a pile of bones.

That confirmation was enough for Hamilton, who charged that the Jamaica Racing Commission (JRC) needs to sanction owners found to have abandoned their animals.

"The JRC needs to become more proactive in the matter, and those horses that have been identified as coming from a particular stable or being owned by a particular person, [the owners] must be warned off the racetrack and not allowed to come back on the compound."

But Dr St Aubyn Bartlett, senior veterinarian with the JRC, argued that the commission cannot act against delinquent owners unless a report is made.

"For any action to be taken against owners who have contravened the rules of racing, the matter has to be reported to us in a formal report. We cannot act on anecdotal evidence, and I have never received a formal written report from the JSPCA, in regard to horses being abandoned."

This claim was rejected by Dr Pam Lawson of the JSPCA.

"We have had meetings with them. We have written them countless letters and nothing has been done. So, at this time, it seems pointless to keep writing."

Lawson said most of the horses rescued by the JSPCA had to be put down.

"We found one horse, late last year, that was basically living in garbage. It had chronic maggot infestation. It was emaciated, and for three days, all it passed was juice boxes and styrofoam boxes, and it was impossible to find its owner.

"We were actually assisted in the treatment of that horse by [a doctor] from the JRC, so it's ridiculous for them to tell us they don't know of what is going on with the animals."