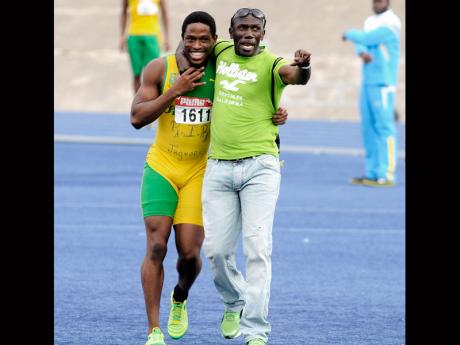 Raheem Chambers of St Jago High gets a hug from assistant coach Gary Walsh after he won the Under-18 100 metres final in a personal best 10.28 seconds at yesterday's Carifta Trials at the National Stadium. - Gladstone Taylor/Photographer

ST Jago High's Raheem Chambers scorched the track with a brilliant personal best 10.28 seconds win in the Under-18 boys' 100 metres final on the opening day of the Carifta Trials at the National Stadium yesterday.

Competing in his first 100 metres of the season, the Danny Hawthorne-coached Chambers was out the blocks like a rocket and kept moving away from his rivals with ease for a comfortable win. Kingston College's Akeem Bloomfield suffered his first defeat of the season finishing second in a personal best 10.42 with St Jago's Chad Walker getting third in 10.45.

Chambers was very elated after his win.

"This win today is for my former teammate Cavahn McKenzie who died at the Cross Country Championships in Tobago.

"I am not surprised with the fast time as my coach worked well with me and I am looking forward to the remainder of the season," Chambers said.

Kimone Shaw made it a double for St Jago in the sprints as she blasted to a personal best of 11.55 to win the Under-18 girls' 100m. Her teammate, Shanice Reid, was second in 11.72 with Convent of Mercy's Kiara Grant taking third in 11.84.

As expected, it was a victory for Wolmer's Jonielle Smith in the Under-20 category. Smith clipped Holmwood Technical's Diana Johnson (second) and Kedisha Dallas of GC Foster College. All three were given the same time, 11.44. Today's final day of the meet begins at 11 a.m.