'Morrison must go' - UTech president under fire for breaches 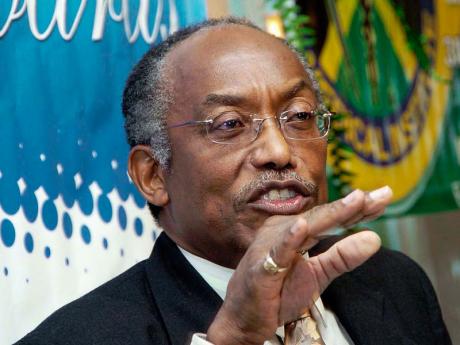 Serious concerns have been raised about president of the University of Technology (UTech) Professor Errol Morrison's management of the institution, with suggestions coming forward that he be replaced.

According to recommendations in a final report from the Special Advisory Committee set up to probe allegations of financial irregularity and bad governance at the university, the Government should begin immediate steps to search for a new president, widening the pool to include the diaspora. It also called on the Government to exercise more control over the university.

The contract of the 69-year-old president expires on February 2, 2015, but the committee noted that Morrison has passed the retirement age.

"The university, in our opinion, needs to take decisive action as to whether the incumbency is in the best interest of the university. We do not think so," the report stated.

Last October, following an escalating conflict between UTech staff and its management, the Ministry of Education intervened, meeting with external members of the University Council where a four-member committee was established to conduct an independent probe.

The final report of the committee was released in February, outlining its findings as well as making a number of recommendations.

Among the findings, the committee noted that the university breached a number of government guidelines, made several unapproved appointments, and lacked transparency and accountability in its operations and spending practices, all of which led to serious mistrust among the staff.

Unless the 'deficit of trust' between management and staff is addressed, the tensions will continue to the detriment of the university, the report stated.

The report also included findings from a Public Accountability Inspectorate Division Investigative Report on UTech, by Financial Secretary Devon Rowe, which stated that approximately $2.7 million was spent on a full-page article on Morrison, which was placed in the Caribbean Investment Profile Jamaica 50th Anniversary Special, published by Caribbean Investment Profiles Ltd, a company located in London, England.

According to the report, "information gathered revealed that the transaction was conducted from the office of the president and was not processed through the university's procurement system".

The committee - comprising chairman, Ambassador Derrick Heaven, Shirley Tyndall, Olubusola Akinladejo and Kofi Nkrumah-Young - also noted that many of the conflicts could have been settled if the council had taken strong, decisive action. The council is the supreme university body and has legal responsibility for all appointments and promotions, as well as for the maintenance of standards.

When contacted by The Gleaner, Morrison was reserved in his comment, stating that all decisions would be left up to the university council. However, according to the committee, when he met with them in February, the president responded to a number of concerns raised. Among them was that he was not aware that a "feeling of victimisation and fear is present on the campus", and that he would welcome, if there was any proof, it being brought to his attention.

In response to the assertion by the staff that the university's operations were not transparent, the report said Morrison contends that UTech was "overgoverned".

In its conclusion, the committee said it strongly recommended that: the education ministry reinforce to UTech that it was not autonomous and must adhere to procedures stipulated by the Government. It also advised the ministry to take a more active role in the transition process, as well as decide if a duplication of technical skills courses provided by UTech and the University of the West Indies was necessary.

Yesterday, Minister of Education Ronald Thwaites' only comment was that his duty was to refer the matter to the Jamaica Tertiary Education Commission (headed by Maxine Henry-Wilson), whose responsibility it was to monitor and determine the direction of tertiary education in Jamaica, as well as to UTech's governing council.

Reports are pending from the Auditor General's Department as well as the Office of the Contractor General.