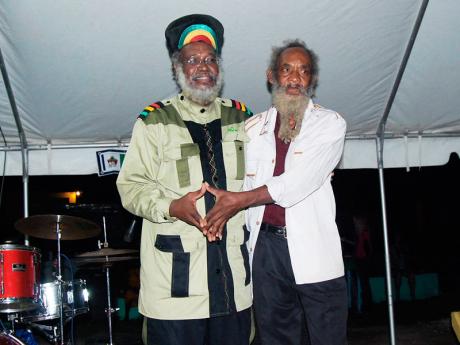 Attorney-at-law Michael Lorne (left) and Ras Iyah V make a gesture in solidarity during the launch of the Westmoreland Help and Ganja Farmers' Association on Sunday night. - Photo by Claudia Gardner

Members of the newly formed Westmoreland Hemp and Ganja Farmers' Association (WHGFA) say the official licence to grow and sell marijuana, upon legalisation, should be restricted to members of the Rastafari faith and lower socio-economic groups, who have been victimised for decades for cultivating the herb.

"We will not stand by and watch anybody outside of Rastafari and grass-roots people take over this product. And we make no apology," association President Ras Iyah V declared during his address at the launch of the organisation at the MXIII Lawn in Negril on Sunday night.

"Because we not going take baton lick and brutality and all of a sudden now when the legalisation aspect come, a some rich people come tek it ova - people who used to scoff and scorn at the very mention of the herb name ganja," he added.

"The WHGFA's objectives are to make sure that those who have paid the price - who have been going to jail, going to prison, getting the baton licks, who have been planting the herb and it get cut down by police and soldiers, and yet have been persistent with this product - that the rights of these individuals are protected."

MISSING OUT ON BIG BUCKS

Ras Iyah V said the Government had procrastinated over the legalisation of the herb while other countries with poorer quality marijuana, as well as more than 20 states in the United States, had already boosted their economies from the multibillion-dollar medical marijuana industry, which he said could positively turn around the island's economy.

"We have a product that is known to be the best in the world, and it is in demand by the world. So why should we continue to watch our people suffer? Why should we have to look at schools that have to go on shift? And when you talk to the Government about schools, about roads, hospitals, and the health system, they are going to tell you they don't have any money," he said. "We don't have any money, but we have a product that can be utilised to bring money into Jamaica to help alleviate the poverty-stricken conditions that the masses of the people live in. We can plant herb and reap herb every day," Ras Iyah V said.

"Why should we as a people stand by and watch this herb being continuously destroyed because the governments, past and present, of Jamaica have allowed the US of A, which is growing herb and making medicine out of herb, dictate to them. Because we are not organised, we are not respected," Iyah-V said.

In a recent article, Forbes magazine noted that "it turns out that weed is big business". It noted that "the US medical marijuana market, worth some US$1.7 billion in 2011, is expected to blossom into a US$9 billion industry by 2016 and that ballot initiatives that legalised recreational marijuana use had opened up an estimated US$35 to US$40-billion US market.

Rastafarian attorney Miguel Lorne, who also addressed the gathering, said he was already conducting research as the aim was to establish a complete industry, producing value-added products, unlike Jamaica's bauxite industry, which only exports alumina, the secondary stage of bauxite.

"I want when we set up the industrial aspect of this, it must be in the very same locality where we grow the ganja. It musn't go to no factory somewhere, where we have no control over it. It must be here, so when we extract the oils for making the soap, the skin-care oil, hair oil, lip gloss, and the many products, it must be made right there so it provides employment for the people and the locality," he said, eliciting huge cheers from the audience.

"We respect those who do their research - whether they are at the University of the West Indies or other universities - we respect you. All those who come with different policies and programmes, we respect that. But, we ain't going to be growing to sell it to you. We are going to make that very clear because that is slavery all over again. We are wiser now because we know the value-added product gives you more income than the primary product," Lorne said.

He added: "Look at bauxite. We produce it; you (industrialised countries) take the bauxite and you carry it and you make planes, ships, cars, everything - and we can't buy those planes and those ships. We don't even have Air Jamaica today."