A port isn't the 'ongle' option 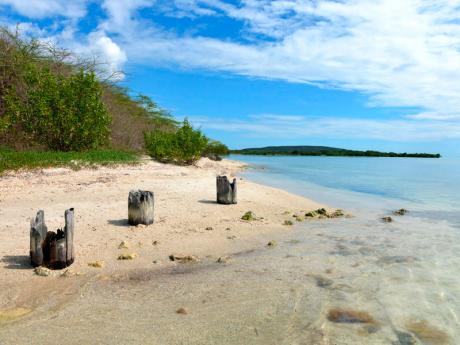 This January 25 photo shows a sandy beach with the remains of an old wharf on uninhabited Little Goat Island in Jamaica. Chinese investors have their eyes on the Goat Islands for a strategic foothold in the Caribbean.-AP 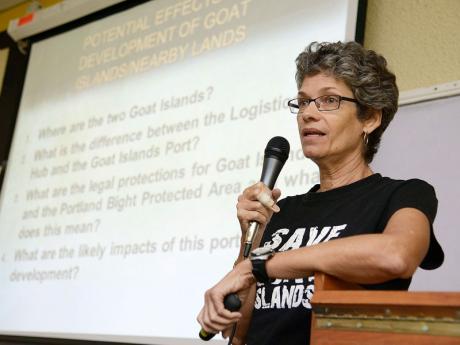 Diana McCaulay, CEO, Jamaica Environment Trust, speaks at a lecture on the potential effects of industrialisation on the Goat Islands on Thursday.-Photo by Gladstone Taylor/ Photographer
1
2

Some alternative uses for Goat Islands

One of the elements lacking from the government side in this whole Goat Islands development affair has been a staunch unwillingness to discuss alternative uses for the site. If one looks at the facts, it is difficult to understand why the Jamaican Government has refused any suggestion that much of what is the proposed in this Chinese component of the broader logistics hub concept can actually be integrated into the space currently provided by the seventh-largest natural harbour in the world, the adjacent metropolitan areas (Kingston and St Catherine), and adjoining parishes of Clarendon and St Thomas.

According to a February 28 Jamaica Observer report, Minister of Transport Housing and Works Omar Davies gave a report to Parliament where he said two things of note. First, Dr Davies said, "The port is not expected to be engaged in trans-shipment activities for several years yet."

He also stated, "The port will be a mixed-use facility. It is proposed that it will house the assembly plant for cranes and other port-related equipment. It will also serve as the home base for CHEC's dredging and harbour-building equipment, for use in projects throughout the hemisphere." (Davies: 'Goat Islands project needs another five years', Jamaica Observer, February 28, 2014).

The description of the project by Minister Davies does not suggest this project is part of a logistics hub, but simply a 'parking lot' for heavy cranes, and harbour dredging and mining equipment. Surely, there are alternative sites in Kingston Harbour and other existing ports that could serve this purpose? Would it not logically make sense for this equipment storage port to be based in Kingston Harbour and surrounding areas?

Many of the ecological issues and impacts to the fishers and forests have been highlighted ad nauseam by other columnists. That is not my goal here. I would like to present the idea that alternative uses can be found for using the islands that can satisfy both ecological and economic needs. The Goat Islands, while protected, can still be utilised as a multiple-use managed area. I would like to present two possible types of uses, each with their own pros and cons.

My first suggestion is for Goat Islands to be used as a field-testing location for offshore wind turbines. Offshore wind turbines, as the name suggests, are windmills that are installed at sea for the purpose of generating electricity. Denmark, the UK, Germany and yes, China, are world leaders in utilising this approach for sustainable electricity production. (As an aside, I think that the Government of Jamaica should consider this as a long-term option to support the island's power demands).

However, back to Goat Islands. Through JAMPRO and related ministries, we could encourage technology companies and manufacturers such as Vestas, Sinovel (Chinese), Siemens and GE to install turbines for field-testing in tropical conditions (hurricanes, higher temperatures, etc.).

In order to minimise the in-water installation costs (where the turbines sit on pylons driven into the ocean floor), parts of Little Goat Island could be used as the base for installing turbines. As time passes, the companies could also test in-water installations in and around the shallow waters of Portland Bight. This would also allow these investors to test other technical issues in tropical conditions such as power storage, i.e., battery technology, as well as the efficiency of electricity transmission via lines underwater to the mainland.

Of course, there would be the added benefit of power generation to the national grid if and when the systems are functional. The obvious spin-offs (no pun intended) from this type of project would include technology transfer, local manufacture of components (on the Jamaican mainland), high- to medium-skilled employment (electrical engineering, machinists, etc.), among others.

Yes, this type of development would obviously have an environmental footprint. There would be the need for dredging to enable berthing for supply ships and barges, removal of vegetation for turbine installation, as well as bird strikes from the blades of the turbine.

However, a proper development plan would require corporate, social and environmental responsibility. There should be requirements for investors to include environmental mitigation plans in their business models. For example, compensating for bird strikes, they would contribute funds for watershed and forest management to mitigate deforestation on the mainland (charcoal burning, illegal development, etc.), thus preserving forest and bird habitats.

The second suggestion is to invest in the development of a world-class biodiversity research centre or laboratory. This would require a combined effort between local and regional tertiary institutions and relevant government agencies, as well as international research institutions (Scripps, Smithsonian and others).

Construction of a state-of-the-art, solar- and wind-powered, eco-friendly complex that can house visiting scholars, undergraduate and graduate-student groups focusing on land-based (terrestrial) as well as marine biodiversity work. There are economically successful models of similar facilities world over, including, although at a smaller scale, our own UWI Discovery Bay Marine Laboratory.

Researchers could engage in studies of, for example, the success rate of re-establishing the Jamaican iguana and coney on Great Goat Island or observing wind turbine avoidance strategies by migratory birds. The centre would also facilitate marine science-related work in the waters of Portland Bight, including supporting the monitoring of the fish sanctuary.

However, this facility should not only be for a few scientists and researchers. Broader economic opportunities in tourism could be had through incorporating touristic and 'edutainment' features into such a development. Interpretive visitor centres, nature trails, natural history museum, marine aquaria, etc., can bring additional revenue.

One could imagine schoolchildren, Jamaican locals and cruise ship passengers (from Kingston Harbour) taking small boat trips out to visit the Goat Islands Biodiversity Research Facility. All this could be part of the oft-touted (but under-realised) South Coast Sustainable Tourism Development Model. Development of this type of facility will also have an environmental footprint through construction and operational activities.

However, I would contend that for both options presented here, the environmental impact would be much less than levelling two islands, dredging and filling for a developing a port for storing 'ol' iron' (cranes and bulldozers) and dirt (limestone, bauxite and coal).

I should highlight that these two options are not necessarily mutually exclusive. They could occur simultaneously and provide jobs, advance science and ecological conservation while sustaining livelihoods for those who rely on the fish that are produced from the nursery areas around these islands.

This suggested mixed-use approach in a protected or managed area is not a new concept and embodies sustainable development principles. It could provide greater ecological and societal gains when compared to the one 'an' ongle' option currently being proposed by the Government for this site.

Dr Peter E.T. Edwards is a Jamaican marine scientist, environmental economist and policy analyst. He currently works as a consultant for a US federal ocean and coastal management agency. Email feedback to columns@gleanerjm.com and peteretedwards@gmail.com.