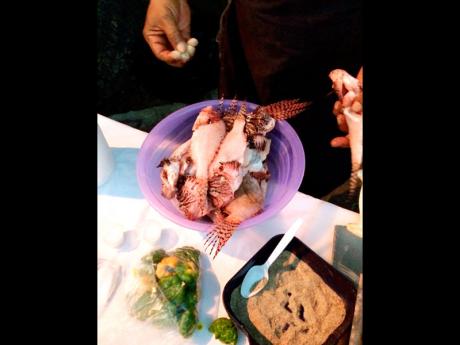 Lionfish, with the spikes removed, being prepared for cooking.

WESTERN BUREAU:In a bid to curtail the reproduction of lionfish in Montego Bay's Coastal zones, the Montego Bay Marine Park Trust (MBMPT) has launched an initiative dubbed 'Seafood Nights' in collaboration with The Pork Pit eatery located on Gloucester Avenue.

According to MBMPT Out-reach Officer Joshua Bailey, the weekly promotional project is sponsored by the Global Environment Fund's Small Grants programme and is being promoted to encourage a local demand for the lionfish. During the first event, staged last week Thursday, several Lionfish dishes were offered at reduced prices.

MBMPT will continue to stage the event every Thursday between the hours of 5 p.m. and 10 p.m.

"The findings of the Lionfish Monitoring Project implemented by the MBMPT and the University of the West Indies (UWI) Discovery Bay Marine Laboratory suggest that the best way to attempt to mitigate the negative effects that this invasion causes is to encourage a public demand for the fish. The Seafood Nights initiative is a magnificent opportunity for us to introduce the Lionfish to the public and encourage the regular consumption of this type of fish," Bailey said.

He said Seafood Nights features an educational display area where patrons are able to learn about the Lionfish, witness live dissections, and view live specimens, while enjoying live entertainment.

A document on the Lionfish, prepared by the UWI in 2011, noted that the creatures, although edible, have venomous spines, which they use to defend themselves from becoming prey to other fish, and which are also capable of inflicting a very painful sting to humans.

According to the UWI, the creatures belong to a group of venomous fish and are related to the scorpionfish, which are found in Jamaican waters. The lionfish preys on juvenile fish and shellfish and is a sit-and-wait predator capable of consuming large quantities of fish and shellfish daily, negatively affecting the fish stock in a country.

The UWI said the creatures reproduce all year round in the Caribbean and a female Lionfish is capable of producing two million eggs each year. It noted that the creatures, "for many reasons, were released into the canals and seas and set free after they grew too large for aquariums owned by aquaria enthusiasts, mainly in the United States, who had imported them for their homes and offices. Since then, they have made their way along the East Coast of the US, The Bahamas, Hispaniola, Cuba, Jamaica, and many other countries throughout the Caribbean".

Since November last year, members of the Negril scuba-diving fraternity have been expressing concerns about the growing number of Lionfish being spotted off the West End coast in the town. Just recently, researchers at the University of North Carolina announced that Lionfish, which are alien to the Caribbean, were threatening local fish populations and were outeating marine predators such as sharks and barracudas and that "mother nature appears unable to control its impact on local reef fish".