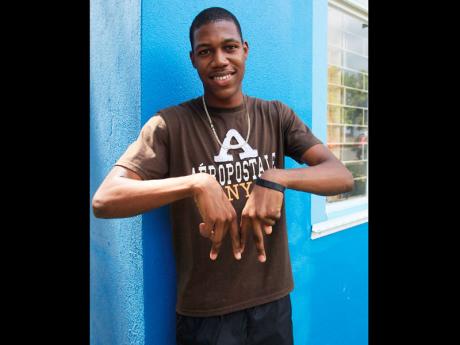 It will be his first experience at the Inter-Secondary Schools Sports Association/GraceKennedy Boys and Girls' Championships, but that hasn't stopped Kingston College's Anguillan runner, Zharnel Hughes, from embracing the challenge that lies before him.

Hughes is expected to do battle with hotshot Calabar sprinter Michael O'Hara in the highly anticipated Class One sprints.

However, the Carifta and Junior Pan Am 100m champion can hardly contain his excitement ahead of the high-pressure set of clashes.

"I don't have any fear. I'm not used to the Champs atmosphere and that's the only thing that I'm worried about; to manage the crowd. Besides the races, it's not who I am going up against, it's my clock and my lane. So I am focused on my clock and my lane," said the smooth-talking 18-year-old, while speaking to journalists at the International Association of Athletics Federations (IAAF) High Performance Training Centre on Monday.

Continuing, he said: "I don't have a rivalry against him (O'Hara). I respect that athlete, he is a very good athlete and I give respect where it is due. I have nothing against him, I'm just looking forward to racing him."

"I am much more focused and stronger, I am more faster. I used to have this fear about going up against other athletes, but I am training with some of the best guys and they motivate us, and when I go out to compete, it's like being with them," Hughes smiled, before pointing to his experience at title contenders Kingston College.

"Knowing that I'm the Carifta champion and going to KC, man, it has been a great experience. The guys have been amazing, we run a lot of jokes and I love the experience there," Hughes added.

The boys Class One 100m final is set for 8:25 p.m. on Friday inside the National Stadium.