LIME to roll out new 4G network - 5G being developed by UK, Germany 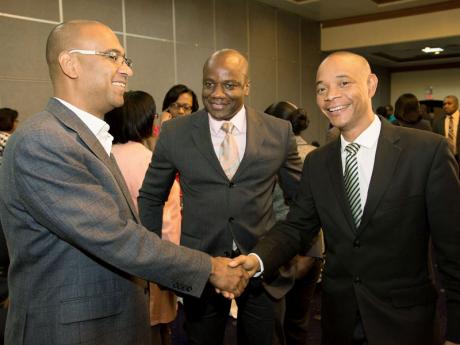 LIME will be launching its new 4G mobile service in the next two weeks to bring faster data speeds, improved voice quality and expanded service to its Jamaican customer base.

"Within the next two weeks, we will start ripping and replacing the equipment at our existing cell sites with the latest and best 2G and 4G mobile technologies available on the market today, with a technology road map for smoother capacity and feature upgrades in future," according to Walter Brown, chief technology and information officer at LIME.

A major shipment of LIME's upgrade equipment is now on the island, said Brown, while speaking at the Private Sector Organisation of Jamaica's President's Breakfast Forum at The Jamaica Pegasus hotel, New Kingston on Tuesday, where he gave an update on the telecoms U$79-million (J$8.7-billion) mobile network upgrade and expansion programme.

The Kingston and St Andrew area will be the first to switch over to the 4G technology, with several cell sites being changed next week, said a release from LIME. Clarendon and Manchester will follow as the current phase of expansion treks westwards.

Other customers may have to wait until next year to benefit, the company said. LIME's network upgrades will be completed by mid-2015, by which time all parishes across Jamaica will be 4G-enabled, the release said.

LIME customers will not be the first to experience 4G service, as Digicel, Jamaica's other mobile telecommunications company, launched its own 4G service in Jamaica in 2012. It, too, is increasing its network coverage.

"Digicel is in the process of rolling out an additional 170 4G mobile sites across the island, which will see us increasing our 4G network coverage from 80 per cent to 92 per cent population coverage," Barry O'Brien, CEO of Digicel, said earlier this month.

Meanwhile, further improvement is on the horizon with the development of 5G technology, which could be 1,000 times faster than today's 4G.

Germany and the United Kingdom are to collaborate on developing the next generation of wireless, 5G Internet, according to UK Prime Minister David Cameron in an address at the CeBit trade show in Hanover, Germany, earlier this month.

"With 4G, an 800-megabyte movie takes around 40 seconds to download; with 5G that would be cut to one second," Cameron said.

Earlier in the year, South Korea announced that it would be putting US$1.5 billion towards the development of 5G, with a trial network planned for 2017.

LIME's new 4G system will deliver mobile data speeds of up to 21 megabits per second, the release said. The company said its technical team made its first test call on the 4G network on Monday, March 24. A high-speed data test on it is to follow shortly.

Growth in mobile data usage by LIME customers has been boosted by, among other things, changes in the regulatory environment in May 2013, which brought a reduction in cross-network rates, the release said.