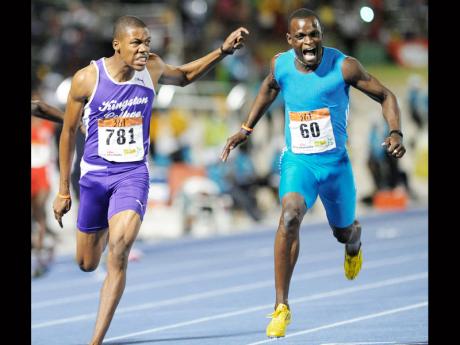 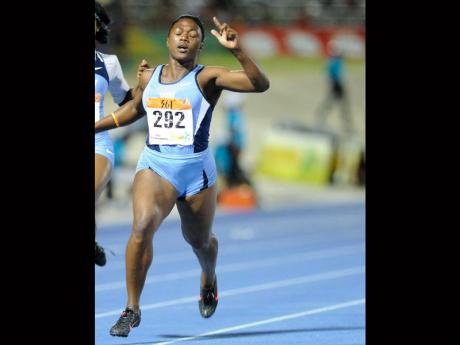 Christania Williams of Edwin Allen High, winner of the Class One girls' 100 metres in 11.19 seconds.
1
2

Kingston College's (KC) Anguillan-born Zharnel Hughes turned in a scintillating performance to smash the boys' Class One 100 metres record on yesterday's fourth day of the ISSA/GraceKennedy Boys and Girls' Championships at the National Stadium.

The lanky Hughes clocked 10.12 seconds to erase the previous mark of 10.21, which was set by Yohan Blake of St Jago in 2007. Bog Walk's Jevaughn Minzie also dipped below the old mark in taking second in 10.16 while Raheem Robinson of Wolmer's Boys surprisingly took home the bronze in 10.37.

Hughes was delighted with his performance.

"The race was a very exciting race for me," said Hughes. "I was focusing on execution, on winning, and not on the record but it came and I am happy," he said.

The Class One girls' 100m was captured in near record time by Edwin Allen High's Christania Williams. Williams clocked 11.19 to defeat Jonielle Smith of Wolmer's Girls (11.32) and Monique Spencer, also of Edwin Allen, 11.46.

Earlier Wolmer's Jaheel Hyde confirmed his billing as the best 400m junior hurdler in the country when he posted a national junior record time of 49.49 seconds to win the event. Hyde, the son of former national footballer Lenworth, was overjoyed.

"I am very happy with my performance because I have worked very hard throughout the season to achieve this," said Hyde.

Paul-Ann Gayle of Edwin Allen topped the girls' Class Two discus with a throw of 44.27m ahead of her teammate Janell Fullerton (43.13m) and Shanice Love of Excelsior (39.39m).