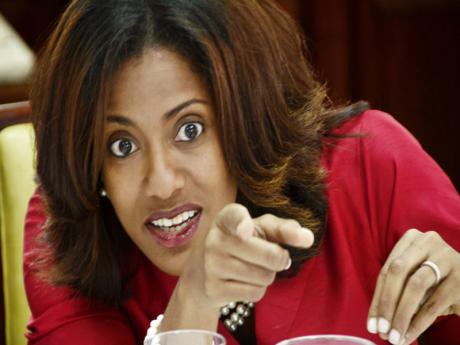 There is no such thing as gender equality. The notion is, sadly, nothing but an accepted misnomer. Any debate seeking to affirm that males and females are of the same social standing cannot stand up to careful, honest scrutiny.

There really is no need for a gender-neutral quota system in our Senate and politics, as recently mooted by Senator Imani Duncan-Price. Nor is there the need for the current media advertising campaign from two gender-equality crusading organisations.

In today's masculinity-challenged context, any questioning of the concept of equity between the sexes is immediately met with consternation. But never being one to tread lightly, let's trod along. Bring on the labels: sexist, bigot, machismo maniac, male chauvinist pig. They are just skewed labels.

Nature's evidence strongly suggests that she never intended the genders to be on equal footing. In fact, the concept of gender equality is the greatest threat to family life. It has resulted in dysfunctional families, the degradation of societal mores, and even sexual perversions. Let's delve deeper.

Corporate businesses, institutions and organisations have substantially benefited from the female's inherent diligence and drive - at the expense of the abandonment of her intended natural role of family nurture and support. In blunt terms, the woman's place is truly in the home. In today's reality, however, economics has necessitated at least two breadwinners for the typical nuclear family, as a single income cannot suffice. The catch-22 of it all is that homes and families have been left to bleed to death, and the manhood of male spouses is constantly challenged by a supposedly independent woman who is not mentally wired to handle independence.

It is true that some lazy, lackadaisical and unambitious men have ceded space to the usually power-hungry, ambitious woman. But for the most part, the man has crinkled as he is maligned and marginalised on the sacrificial altar of gender equality by a feisty, emotionally charged and often combative woman.

As she asserts her supposed equality and stands at the pinnacle of independence, any wishes from the man for fidelity can be barely whispered. She holds the purse strings now, being so mighty and powerful that he dare not require her to be faithful to him. And so she runs wild, out of control, bereft of the expected self-imposed dignity.

Of course, the home she was intended for is a more controlled environment, since she cannot be left up to her own devices - evidenced by the fact that as it relates to fidelity, the modern woman is generally non-trustworthy. If today's woman, on track record, had proven herself to be inherently trustworthy, unfaithfulness would not be the greatest fear of almost every male mate on earth.

Ladies are held to higher standards of self-worth. As more comeliness is expected of the woman outwardly, so is a greater degree of self-respect expected inwardly. Men are dogs and men accept it. Men surely do not want their women to be dogs like them. Unfortunately, this female doggish behaviour (there's a word for it) is now with us, resultant from the concept of gender equality.

For any institution or organised entity to function, a leader is an absolute necessity. The family structure is no exception. Either the male or female of the family will be the natural leader of the household. Leadership does not translate to authoritarianism, but the buck must stop with one or the other. A hierarchical structure is inescapable. And once the need for a leader is accepted, there can be no equality. If not the male, is it the female who must be the designated/natural leader of the household?

Outside of family life, the woman has been able to assume leadership roles based on academic qualifications. Many have excelled at administration. Nevertheless, any investigative exercise will show that the vast majority of powerful or successful career women have been unable to balance careers with successful marriages/relationships. They just were not naturally designed for it. The success and authority vested in the woman at work is usually brought home, upending the authority of the natural male leader. Then there is the boomerang when the male partner's natural ego has had enough.

When the family sinks at the expense of careers, children grow up with only a single parent, more often than not, a single mother. The male child has only a female as role model. He emulates her female tendencies and emerges either wimpish or effeminate.

Women's rights advocates will dismiss such arguments as backwardness, and that's perfectly fine. When women accepted their men as their leader and subdued to that leadership as suggested by the Christian Bible, the odds for successful marriages, relationships and families were far greater. In today's modernity, because of the woman's challenge to masculinity, marriages and relationships have become short-lived, disposable associations. Female promiscuity results, further whittling away the female dignity that ought to be maintained.

Are the gender-equality advocates positing there really is no difference between the male and female except for physical make-up?

Is there even a single male-lobby organisation out there somewhere? The need for such organisations is now stark. The real man is fast becoming an endangered species. Societies and families are under threat from aggressive women's-rights advocates. It is not only gender equity they seek; they intend to displace the natural powers supplied to the human male by nature.

There is a grave need for men to reassert their manhood. Spinelessness deserves no respect. Arguments for quota systems based on gender will dissipate only when males rediscover their testicular fortitude.

The female senator advocating for a quota system in our politics and Senate should recognise the folly of her argument. A female should be entitled to an organisational position only if the best man for the job is a woman. And her gender should not be one of the qualifications.

Milton Wray is a freelance journalist, author and entertainment consultant. Email feedback to columns@gleanerjm.com and miltonwray@gmail.com.