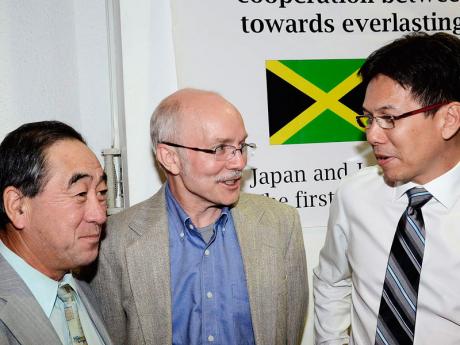 As more Jamaicans ponder alternative sources for energy, leaders are looking to the Land of the Rising Sun for advice.

The Japanese Embassy and the Petroleum Corporation of Jamaica (PCJ) recently hosted the 2014 Japan-Jamaica Smart Energy Seminar for CEOs at PCJ headquarters. Chairman of the PCJ, Chris Cargill, suggested the seminar was a timely one.

"At this point in Jamaica's development, the issue of affordable, reliable and sustainable energy solutions is at the top of the agenda for all of us in leadership across the public and private sectors," he said. Cargill said that as individuals responsible for organisations, they knew most if not all the short- and long-term plans will hinge on our ability to source affordable energy.

"Our ... dependence on expensive imported petroleum has serious implications for the continued viability of all of our entities, regardless of our core business." He said the PCJ was looking for help from countries like Japan, that is charting what can be described as a "national energy revolution". He felt the seminar would provide opportunities for Jamaicans to learn what is working in Japan and decide what solutions can work for us.

Guest speaker, smart-energy expert Dan Bihn, noted that the March 2011 tsunami in Japan knocked out the power source for major cities, including Tokyo. When the summer months came (where Japan's energy use is at its peak), Japanese companies used various methods to reduce energy use. Train stations had 'Power Prediction' charts to inform commuters about what the energy capacity was for the day, hence giving them targets to cut back their usage. Companies introduced smart metres that kept homeowners constantly updated on their usage, and smart appliances like refrigerators that automatically reduce power in the peak hours were created.

But the 'ordinary' man also did his part by replacing fluorescent bulbs with LEDs, or simply cutting back on some of the bulbs they used. They substituted fans for air-conditioning units and even dressed in lighter clothing to keep themselves cooler, allowing them to run the units at lower capacity. He also pointed to the use of microgrids, smaller systems within the national grid that, in case of disaster, can run independently so as to keep sections of the country connected.

The seminar is part of celebrations to mark the 50th anniversary of Japan-Jamaica diplomatic relations and Japan-Caricom Friendship Year, being celebrated in 2014.