Progress too slow: PM laments pace at which women advance in politics 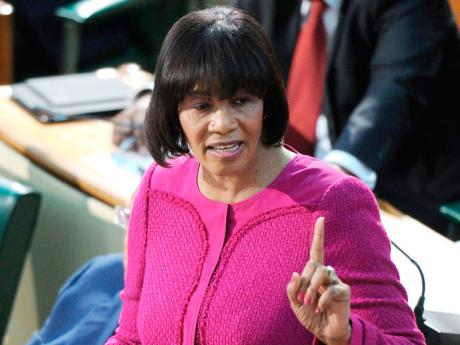 Prime Minister Portia Simpson Miller says not enough progress has been made to increase the number of women involved in parliamentary decision-making since adult suffrage in 1944, arguing that the pace at which they are being integrated leaves much to be desired.

"We cannot sit back and feel comfortable because a few women have been able to break through the barriers and create history," Simpson Miller said.

"Women's voices must be heard more and louder anywhere that public choices are being made that affect our lives."

Simpson Miller, who became Jamaica's first female prime minister in 2006, said the ascension of women to leadership positions around the world is being advanced by many to support the argument that women are making strides in politics.

"We are used as proof that there is little to complain about since they say that progress is being made. I say, not enough progress in this area," the prime minister said.

Simpson Miller was speaking at a ceremony in recognition of her 40 years of service to Jamaica as a parliamentarian and being the country's first female prime minister at the 27th meeting of the executive committee of the Parliamentary Confederation of the Americas (COPA) women's network at the Hilton Rose Hall Resort and Spa in Montego Bay yesterday.

A motion for the temporary enactment of a quota system to boost the number of women in the Parliament, which was brought by government senator Imani Duncan-Price, has reignited the debate about women in politics.

Duncan-Price is proposing that no sex occupy more than 60 per cent of the seats in the Senate, and that a minimum 40 per cent of candidates for national elections be of either sex.

Simpson Miller said many persons will point to the eight female members of parliament, six female senators and three women mayors as evidence that progress is being made in politics.

"My answer to the argument that progress is being made in this regard - and to those who believe there is no need to complain - is that an aircraft is in the sky making progress, so, too, is a cart on the ground. The difference is in the pace. Yes, progress is taking place, but the matter of pace is of critical consideration," the prime minister said.

Meanwhile, the prime minister steered clear of addressing the issue of quotas, but made it clear that women should get a fair opportunity to make decisions.

"It is well known that women are under-represented at the level of political decision-making. The under-representation of women in politics is seen worldwide. Yet, whenever the subject is raised about women and the need for us to have our fair share of participation of higher levels of decision-making, invariably, fingers are pointed to the few of us as women in top positions," the prime minister said.