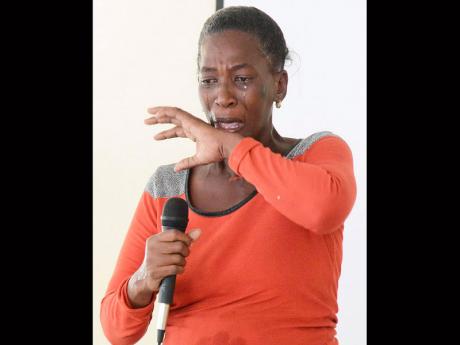 Tivoli resident Nadine Sutherland yesterday recounted the horror of two nephews being killed by members of the security forces, she claims, during May 2010, when policemen and soldiers went into the community in search of then fugitive Christopher 'Dudus' Coke.

Thirteen years earlier, her son, Conrad Francis, who had just turned 18 years old, was among five persons killed by members of the security forces during an operation in the west Kingston community.

Sutherland claims that another nephew, who now lives overseas, has vowed never to eat meat again because of atrocities he saw inflicted upon humans during the 2010 police-military operation.

Sutherland and Marjorie Hinds, whose 13-year-old daughter reportedly watched as members of the security forces shot her father in cold blood in 2010, were recounting their tales of horror during a public forum hosted by the Tivoli Committee at the Council of Voluntary Social Services on South Camp Road in Kingston yesterday.

Hinds claimed to have been injured in a mortar blast, which she said ripped open the left side of her face and partially paralysed her right hand, rendering her unfit to hold a steady job. She broke down in tears, while recounting the events and admitted to still being traumatised.

"When the bomb ketch mi and fling mi out inna di road, two youth dead beside a mi and mi inna di road a batta. Mi never know myself, mi unconscious," she claimed.

COULD GO TO ICC

The Tivoli Committee, headed by Lloyd D'Aguilar, is working to get Hinds and Sutherland, along with other residents, to testify at the upcoming enquiry into the 2010 incident. They are hopeful that the accumulated testimonies of the Tivoli residents will provide the basis for a substantive legal brief to take the case to the International Criminal Court based in The Hague, Netherlands.

The civic group is working to raise public awareness among Jamaicans from all walks of life to fuel their drive for accountability by the State, with then Prime Minister Bruce Golding among those they feel should be brought to book.

It also wants former chief of staff of the Jamaica Defence Force, Major General Stewart Saunders; Police Commissioner Owen Ellington; and former National Security Minister Dwight Nelson to answer for the pain, suffering, and loss of life and property from the operation.