This one is special - Edwin Allen's Dyke 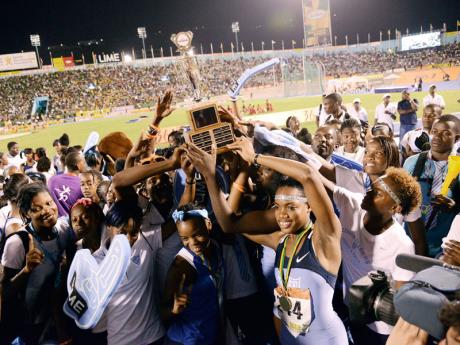 Edwin Allen High lift the trophy as they celebrate their Girls' Championships victory.

Edwin Allen tallied 337.5 points to finish way ahead of St Jago, 263, during the five-day championship at the National Stadium. They were followed by Hydel High (229) and dethroned-champions Holmwood Technical (211.5).

Edwin Allen, which is located in Frankfield, Clarendon, won their first title in 2012. They finished this year's Champs impressively by winning three of the last six relays.

"I think this victory was even better than the previous one," said Dyke. "I said to the girls that this is our 50th anniversary, and so let us win this one for the school," he said.

"This one is special because it is for the entire Edwin Allen family," Dyke remarked.

Edwin Allen were overwhelming favourites to win the title in 2013, but after leading into the final day, they faltered. With memories of that defeat still fresh in their mind, Dyke said his charges were very determined to win this year's title.

"It feels great, because after the disappointment last year, we went home and immediately started planning for this year," Dyke said.

"Based on the work that we have put in, the girls have worked hard, the management, support staff and supporters have really supported us, and this enabled us to win this title," he said. "Hard work and being able to get a strong support team together to ensure that all the areas were covered was what brought us through to this title."

The coach added that he was not surprised by team's huge margin of victory because his athletes had been outperforming their competitors at the various development meets leading into the championships.

"Definitely!" he remarked. (We were) expecting this margin, because from we started out in September, this was our aim."

"We decided that we didn't want any more close championships, and so we ensured that we separated ourselves from everybody so as to create no doubt in the end," Dyke pointed out.