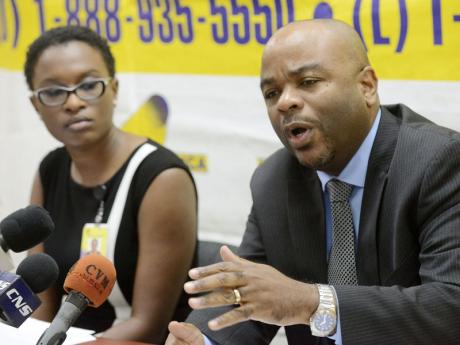 Terrence Williams, head of the Independent Commission of Investigations (INDECOM), speaks with members of the media while Kahmile Reid, senior communications officer of INDECOM, looks on during a press conference at INDECOM's head office in New Kingston yesterday. - Rudolph Brown/Photographer

With recent reports of 'death squads' running rampant in the Jamaica Constabulary Force (JCF) still swirling, the Independent Commission of Investigations (INDECOM) has revealed some chilling statistics about unbridled alleged police killings in one constabulary division.

At a press conference yesterday, INDECOM listed eight cases in which some nine civilians were killed in Clarendon during shootings initially believed to have been carried out by civilian gunmen.

Queried as to whether these latest revelations are confirmation that there are indeed 'death squads' in the force, as claimed by a policeman in a Sunday Gleaner report earlier this year, Williams said he would "prefer to say that we are investigating officers who we believe were involved in unlawful killings over a particular period".

He said the issue of superiors issuing commands for cops to go out and kill was also being considered by INDECOM, and that the commission would be taking its investigations as far up as they lead.

Among the nine persons killed under questionable circumstances, somewhere between 2009 and 2013, is Adif Washington, who was shot on two occasions, including at the May Pen Hospital.

Washington was first shot in the Milk River area. While receiving treatment at the May Pen Hospital, he was shot and killed by masked gunmen who invaded the ward on which he was stationed on January 14, last year.

INDECOM had denied reports that Washington had given a statement to the police oversight body.

But yesterday, Williams said by all indications, a policeman killed Washington.

"Based on the investigations and the charges we have laid, it is our view that the person responsible for that shooting was a policeman, and we have laid a charge against one policeman for that matter," he said.

That policeman, Detective Corporal Kevin Adams, has been charged with three other murders: Sylvester Gallimore on May 5, 2011; Andrew Bisson, who was killed on September 5, 2011; and the February 13, 2012 slaying of Anthony Trought.

The INDECOM boss indicated that Adams was one of some 50 policemen who have been charged since the start of the year for various crimes.

Adams is among four cops from the Clarendon Police Division who have been charged with murder between January and March this year.

In addition to murder, Brown is charged with conspiracy to murder and wounding with intent.