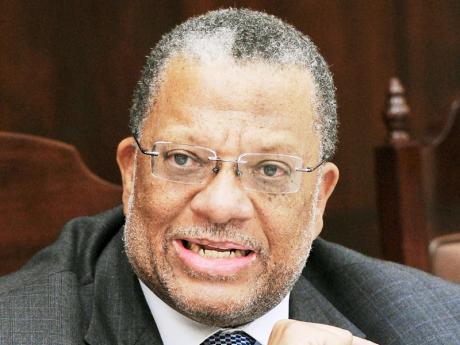 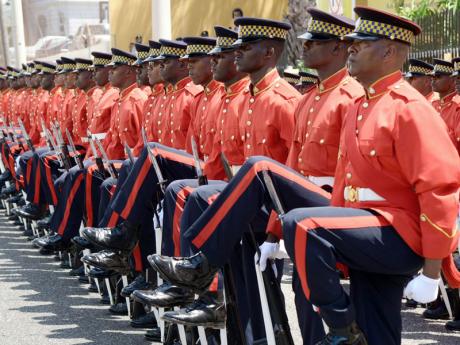 The Guard of Honour of the First Battalion of the Jamaica Regiment of the Jamaica Defence Force takes part in the ceremonial opening of the 2014-2015 session of Parliament at Gordon House in Kingston yesterday. - Ian Allen/Staff Photographer
1
2

DEBT AND public-sector wages are to account for nearly 70 per cent of the $539.3-billion Budget which was tabled yesterday in the House of Representatives by finance minister Dr Peter Phillips.

Some $233 billion, or 43 cents out of every dollar, in the 2014-2015 Estimates of Expenditure is to go towards servicing the debt, while $160 billion has been earmarked for the payment of wages.

The expenditure budget, which is $38.6 billion more than the $500.7 billion tabled last year, will see $404.65 billion used for recurrent expenditure, while $134.69 billion is to go towards capital spending.

Capital A, which represents projects funded by the Government of Jamaica, has been reduced from $120 billion to $109.2 billion.

Public debt servicing (interest charge) is budgeted at $132.7 billion, while pensions are to cost $18.5 billion.

In the meantime, the Govern-ment has set aside $20.58 billion in contingency for the payment of salaries and to meet other commitments. Some $7.4 billion is to be directed to salary arrears and to meet outstanding settlements; $2.3 billion is to go towards health-sector reclassification; and $3.3 billion towards settling the public sector Heads of Agreement for the 2012-2015 contract period.

Another $6 billion has been set aside to meet general consumption tax payments on central government purchases, and $1.5 billion is for other debts, including $1.2 billion, which should go towards meeting electricity payments.

Prime Minister Portia Simpson Miller on Tuesday signed a bilateral memorandum of understanding (MOU) that will see the Indian Government giving US$2.1 million for the installation of floodlights at Sabina Park.

In addition to central government spending, the country's public bodies are to spend $454.8 billion this year, $51.9 billion of which will come in the form of capital spending and $402.9 billion in recurrent expenditure.

The Jamaica Urban Transit Company is budgeted to spend $11 billion, some $3 billion of which will take the form of capital spending. Taxpayers will be required to further subsidise the state-owned carrier as the Government is proposing to allocate $3.1 billion to it, up from $1.9 billion last year. The funds are to be used for the purchase of buses.

Parliament's Standing Finance Committee will review the Estimates next week before Phillips opens the Budget Debate on April 17.