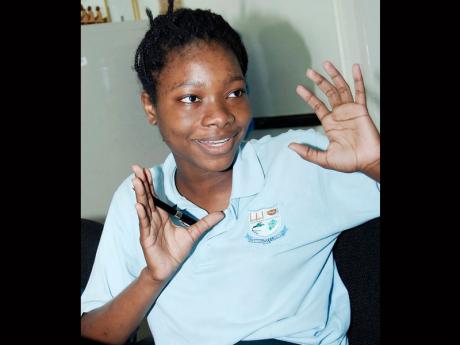 Hillel Academy student,Tchakamau Ra in an animated mood while responding to questions during a Gleaner interview.-Colin Hamilton/Photographer

With a few weeks to go before her 18th birthday, Tchakamau Ra has already mapped out the trajectory she will be taking towards making her mark as an astrophysicist researcher while studying jungle animals.

Already accepted in 11 of the United States of America's top universities, including Ivy League schools such as Princeton and Yale, Tchakamau credits her success largely to her homeschooling background.

Tchakamau, a past student of the public institution Immaculate Conception High and Hillel High, a private school, said she would choose homeschool over private and public schools any day, because of the freedom it gave her to explore a variety of topics outside the standardised curriculum.

Her mother Kamau Mahakoe homeschooled her until she entered high school in grade 7 and she was later tutored by her mother and father, Omari Ra, at home in six other subjects at the Caribbean Secondary Education Certificate (CSEC).

Tchakamau successfully completed 16 CSEC subjects in 2012 with 15 grade ones.

"At home I just feel you have more freedom because you are no longer catering to different people ... it's just you and maybe two other students," she noted.

Tchakamau added that homeschooling helped significantly as she was able to get the individual attention she needed to truly excel and take on the variety of subjects she did, as she was not limited to the eight to 10 subjects students are generally restricted to in high school.

Her mother agreed that the flexibility her children have been afforded through homeschooling is largely responsible for them being so versatile and well adjusted.

"The maturity and independence of thought that were inculcated in them in the homeschool environment, moulded them into well-adjusted beings who were eager to find their place in the new setting and perform at their best," Mahakoe said of Tchakamau and her brother, who have transitioned to high school.

She said while much of the lessons were time tabled, the children were given time to develop other interests and socialise with their peers.