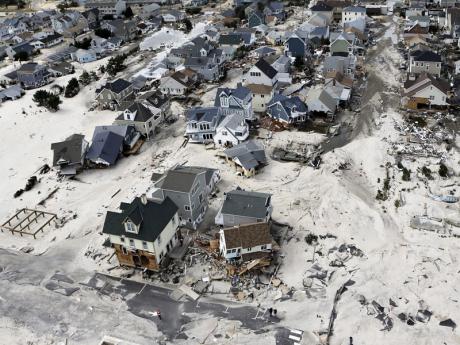 In an October 31, 2012 file aerial photo, the destroyed and damaged homes are left in the wake of Superstorm Sandy in Seaside Heights, New Jersey. The economic and financial impact of global warming is complex, but the phenomenon is not accepted by many. - AP 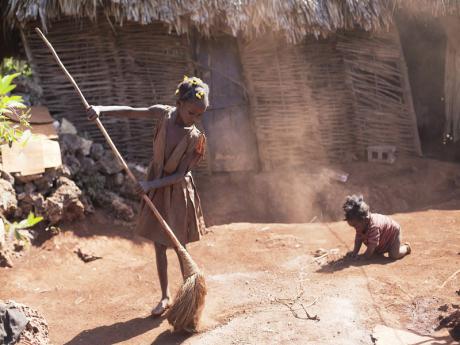 In this March 25 photo, Larionise Beltinor, 10, sweeps the entrance of her home while her seven-month-old brother Jean Widson Beltimor crawls nearby in Bombardopolis, northwestern Haiti, as drought continues to affect that region. - AP
1
2

If you want to go on eating regularly in a rapidly warming world, live in a place that's either high in latitude or high in altitude. Alternatively, be rich, because the rich never starve. But otherwise, prepare to be hungry.

That's the real message of the Intergovernmental Panel on Climate Change's (IPOC) report on the impact of warming on human beings released last week: The main impact is on the food supply. Of course, everybody who was paying attention has already known that for years, including the scientists. It's just that scientists are professionally cautious, and will not say anything that they cannot prove beyond any shadow of a doubt.

The standards for evidence in science are much higher than they are in ordinary life, which is why it has taken the scientists on the IPCC so long to announce the same conclusion that any ordinary mortal who looked into the question would have reached five or 10 years ago. (The scientists really knew it, too, of course, but they couldn't yet prove it to the required standard.)

But the World Bank, for example, has long known approximately how much food production every major country will lose when the average global temperature is 2C higher. At least seven years ago, it gave contracts to think tanks in every major capital to answer precisely that question.

What the think tanks told the World Bank was that India will lose 25 per cent of its food production. China, I have been told by somebody who saw the report from the Beijing think tank, will lose a catastrophic 38 per cent. But these results have never been published, because the governments concerned did not want such alarming numbers out in public and were able to restrain the World Bank from releasing them.

So, too, for example, the armed forces of many countries have been incorporating predictions of this sort into their scenarios of the future for at least five years. The Pentagon and the Central Intelligence Agency in the United States (US) and the British armed forces have been doing it openly, and I have seen strong indications that the Russian, Indian, Pakistani, Chinese and Japanese armed forces are also doing so.

What these predictions mean

When you look at the scenarios in detail, they do not just predict serious food shortages in most tropical and subtropical countries (which account for about 70 per cent of the world's population). They predict waves of refugees fleeing from these countries, a proliferation of failed states in the subtropics, and even interstate wars between countries that must share the same river system when there's not enough water to go around.

That's still farther than the IPCC is prepared to go, but to the military, it's as obvious as the nose on your face. As for what will happen to crop yields by 2050, assuming an average global temperature 3C higher by then, you have to go elsewhere for information. The military doesn't plan that far ahead.

But the World Resources Institute (WRI) published a map recently that estimated the losses, country by country, by 2050, and according to the WRI's calculations, they are really bad by then. Crop yields are down everywhere in the Middle East and the Mediterranean countries. In Morocco, Egypt and Saudi Arabia, they are down by 50 per cent.

All of Africa is down except Lesotho, Rwanda and Kenya, which are all, or mostly, above 1,000 metres in altitude. Food production is down in almost all of South America except Chile, also very high, where it is up. Crop yields in North America are down too, except in Canada and a few US states right along the Canadian border. High latitude is even better than high altitude.

In Europe and Asia, latitude is decisive. Countries far away from the equator will still be doing well; countries even a bit closer to the equator get hammered.

Russia, Scandinavia, Germany and Poland will be producing more food than ever, but southern Europe, including the Balkans and even France and Ukraine, will have lost production. India, China, and all of South-east Asia will be sharply down, as will Australia - but Japan will be only a bit down and New Zealand will be sharply up. It pays to be an island, too.

Gwynne Dyer is an independent journalist whose articles are published in 45 countries. Email feedback to columns@gleanerjm.com.