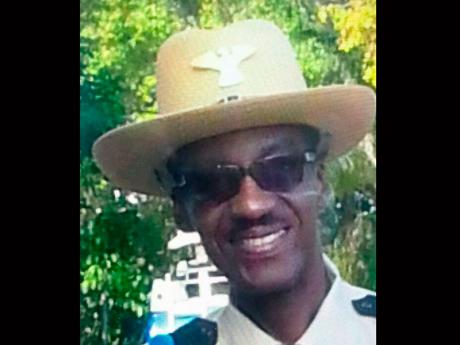 A Jamaican man is now being hailed as a hero in South Florida in the United States for the role he played in saving lives during a shooting incident at a train station last February.

Lester Anderson, 52, a former member of the Jamaica Constabulary Force (JCF), in recounting the ordeal, says his training as a cop in Jamaica was of tremendous help in saving his life and the lives of others.

He is now the proud recipient of the Distinguished Service Award, which he received late last month from the South Florida Regional Transportation Authority (SFRTA).

This is the first time this award was being given.  Before that, Anderson had received a valour award from the company to which he is employed, G4S Secure Solutions.

Anderson is employed to the US firm as a security officer and is assigned as a ticket inspector to the Tri Rail Train of SFRTA.

Anderson was working as a ticket inspector on one of the trains on February 6 when he saw some passengers running from one of the cars as it pulled into the Golden Glades Tri-Rail station.

They told Anderson that a suspicious-looking man was on the upper deck talking about gun.

According to Anderson, he immediately contacted his supervisor, and joined by a co-worker, approached the man.

Anderson and his colleague approached the man, identified themselves to him and questioned him about him being in possession of a firearm.

When the man declared that he was unarmed they asked him to get off the train and started a discussion with him on the platform while awaiting the arrival of the police.

"We were talking normally with the man, when in a wink he lunged at my colleague, 62-year-old James Errante, and threw him on the train track.

"The man was on top of my colleague trying to take away his weapon and I jumped on top of top of the suspect," recounted Anderson.

He said during a struggle the man seemed determined to get the gun of his colleague.

"I put my left hand around the suspect's neck and he bit me on my left thumb, all of my thumb was in his mouth. He bit it so hard that I thought it was bitten off," said Anderson.

He told The Sunday Gleaner that he had to use his right hand to fight for the gun after the man managed to disarm his colleague.

"It was a terrible ordeal because the suspect weighed about 240 pounds and was about 6 feet 4 inches in height. While I was holding the man's hand which had the gun, the man was so strong that he pulled his hand inwards towards our bodies and fired three shots.

"When I looked, I saw the man pointing the gun at my colleague's head. I shouted to him to drop the weapon. He looked in my direction and pointed it in my direction."

According to Anderson, that was then that his training as a policeman in Jamaica came into focus and he fired at the man hitting him.

The injured man fled, climbing over a high fence before attempting to board a bus.

He was not successful in boarding that bus and ran to hide under another bus before being held by the police.

With the man held, Anderson said he went to his colleague and rendered first aid until help came and he was taken to a hospital.

The man, 34-old John Miller, is now facing two counts of attempted murder and other charges.

Anderson, who received treatment at a medical centre, said he is now receiving physical therapy as his muscles were overworked during the ordeal.

"I am happy that I saved my colleague's live, my life and the lives of other persons who were nearby.

"People now refer to me as a hero ... and I thank God that he gave me strength and courage to survive the ordeal, and that I was able to use the training I received in the Jamaica Constabulary Force to save lives."

Anderson left Jamaica in 2000 after serving in the JCF for nine years.

He was a detective constable who worked in several departments, including the Criminal Investigation Unit.