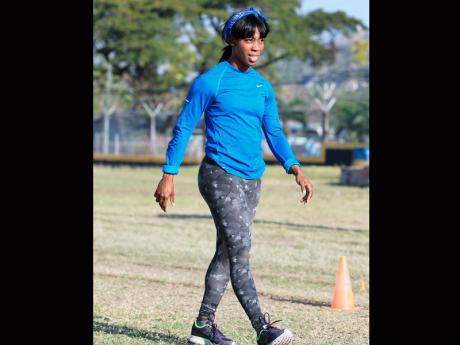 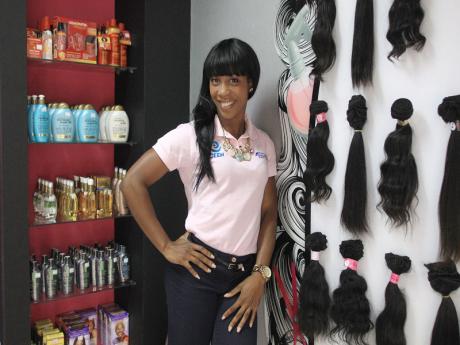 Shelly-Ann Fraser-Pryce at her own hair care and accessories boutique, Chic.
1
2

She is a testament to one rising above challenges. A five-foot frame packed with dynamite ability, a giant among greats, a champion.

Her demeanour, however, belies her exceptional accomplishments, and as she unassumingly went about an abbreviated workout - barely breaking a sweat on the unflattering grass track at the University of Technology recently, it easily becomes lost that she is the best female sprinter on the planet - a medal magnet.

Shelly-Ann Fraser-Pryce is so much more though, a product of one of Jamaica's harshest communities - Waterhouse, the 27-year-old has come to appreciate the value of her labour and, equally, the importance of her responsibility to give back.

The athlete is a focus of the IAAF's Day in the Life project, and as she later that afternoon settled into a styling chair at her own haircare and accessories boutique 'Chic', it became clear that there is a lot more to the woman than speed and talent, as she spoke about her charity, her legacy and the things that keep her driven and grounded.

Four Olympic medals including back-to-back gold in the 100m, seven IAAF World Championship medals - highlighted by gold medals in the 100m (2009, 2013) and the 200m (2013), as well as 60m gold at the IAAF World Indoor Championships last month, marks an unprecedented spell of dominance, which started when an unknown 21-year-old crossed the line in second place at the Jamaican Olympic Trials in 2008.

For many, including her coach, Stephen Francis, she is already the greatest championship sprinter in history - for her, its what she leaves behind when she walks away from the sport that is more important.

"I don't pay much attention to where I fall in history. When I decide to leave the sport, I want to leave it better than I saw it. I want to make sure that other young athletes can see that you need to work hard, you need to stay humble, you need to stay focused and the sky is the limit," smiled the 2013 World Female Athlete of the Year and Diamond League winner.

"There are many more things to come in terms of, as you say, being the greatest Jamaican female athlete or one of the greatest sprinters, because I still want to run 21 seconds, to run low 10.6, and I still have some way to go, for now I'm still set on working hard, being grounded and just trusting God to give me strength and health to do the things that I need to do," she added.

Trusting God seems a big part of her formula. Two tattoos on either wrist with the words 'Faith' and 'Hope' takes this to skin deep proportions.

"Everything thing that I hope for in life I have faith that God will give it to me," she explained.

Also of great importance to the athlete is her Pocket Rocket Foundation, which offers assistance to student athletes - many of whom are faced with financial difficulties. It's a passion born from her own experiences as the beneficiary of another's benevolence.

"... For some reason I think she saw something in me that I didn't see. She funded my education ... she showed me compassion and love in so many ways and in some ways, I feel obligated to make sure that I give the same support to student athletes, that come from impoverished situations. I decided to start a foundation to make sure they have access to education and sport and can become better individuals not only for themselves, but for their families, for Jamaica," said Fraser-Pryce, whose foundation has issued seven scholarships to date.

Still despite her commendable work off the track, its on it where her legacy will be fully highlighted.

"I try not to get caught up in the euphoria. And that's what got me this far. Even in Moscow when I crossed the line after winning my third gold medal. I then sat in my room and thought: "Oh my God." How am I going to run these performances again? Immediately my mind takes me to hard work, back to training.

"It's hard to stay on top. Me in 2007 going to the World Championships, I had no idea that I would've won an Olympic gold medal and a World Championships gold medal. I was working really hard, but when I won, I understood completely what my potential was and how much better I could get if I keep working hard. It was so much more difficult and pressuring, knowing that I just won two gold medals," added Fraser-Pryce who married long-time boyfriend Jason Pryce in 2011.

A budding entrepreneur and a lover of children, Fraser-Pryce who is hoping to leave her mark where it matters most - in the sport she loves and also in the lives of those around her.