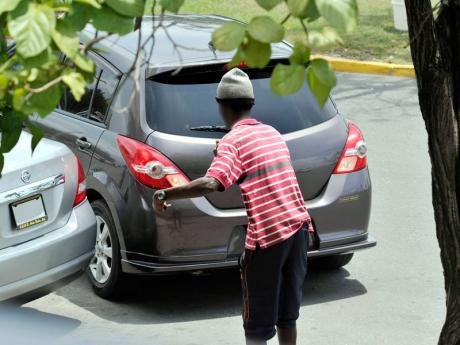 A man directing a motorist to park along Ocean Boulevard, downtown Kingston in September 2013. This is once again big business in the shopping district as motorists must pay a fee to park. - File 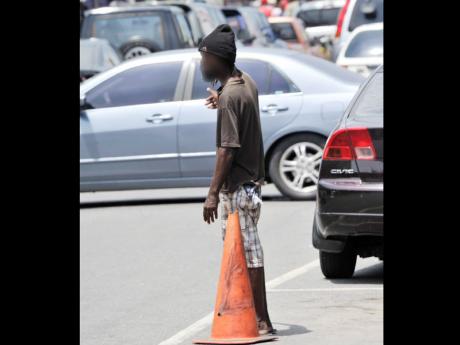 Extortion, the passing of money to community leaders or thugs for protection, continues to be a serious problem in Jamaica's main commercial districts and towns.

Businesses have mixed views, while the police argue that they are doing all they can to kill this cancer, but that many business owners are still slow to cooperate with them, resulting in only a handful of arrests in two years.

Senior Superintendent Steve McGregor, head of the Kingston West Police division, has fingered the problem as a primary cause for the rise in gang rivalry in his jurisdiction.

"When it was under the reign of 'Dudus' [extradited Tivoli Gardens strongman, Christopher Coke], all of it used to go through him," said McGregor.

But with Coke out of the picture "everybody wants to collect by themselves, and there lie the internal issues that we have".

President of the Jamaica Chamber of Commerce Francis Kennedy says that despite the security forces' efforts, businesses in downtown Kingston are still being fleeced millions of dollars by the extortionists.

"Right now it continues but I don't think that they (businesses) are paying over that much cash," said Kennedy, making a comparison between extortion in western Kingston today and what it was during Dudus' reign before the 2010 military incursion.

According to Kennedy, while mainstream extortion is not so rampant today, various gangs plague the more than 1,000 wholesalers downtown, demanding money in exchange for their safety. Instead of sending around persons to collect extortion money, gangsters are now ordering store owners to hire persons as security guards, and that a percentage of the salaries paid to these individuals should be forwarded to the gangs.

It is an informal business transaction which wholesalers, especially those of Chinese descent, have complied with, said Kennedy. He, however, couldn't

give a figure as to the amounts being paid over to the thugs.

"What they say to a wholesaler is 'you need security for your business. Employ Mr Smith and whatever you pay Mr Smith, you pay me part of his salary, you pay me 25 per cent," explained Kennedy in response to questions posed by The Gleaner regarding the origin of extortion in Jamaica. "I really don't know when it started. In 1960 it was there ... but now it has escalated," he said.

According to Kennedy, merchants in downtown Kingston have no choice but to pay the extortionists as the police cannot secure their businesses by themselves.

"The police are not available at all hours of the day and the foot patrols in downtown Kingston are available from about 9 o'clock in the morning till about midday, and then they go to lunch, and then they are available in early afternoon," he pointed out. "They are not there about half of the time. If merchants want to do business in downtown Kingston you (they) have to pay a security charge."

The practice of extortion is not new to Jamaica. Some argue that it has its roots in slavery, while others are blaming the business community for supporting thugs to protect their operations, instead of putting their trust in the security forces.

"That word (extortion) does not feature in my vocabulary," declared the businessman who noted many small businesses foolishly opt to pay thugs for protection.

According to some, extortion in Jamaica may have had its genesis during slavery. But stories of revolting Maroons sparing estate owners who paid for their protection in cash and kind, pale in comparison to scenarios today that involve high-powered rifles, the Caribbean's deadliest criminal networks, and elderly foreigners being bilked millions of dollars annually.

"It's hard to say where extortion started. You could go as far back as Claudius Massop and Jim Brown, (Dudus' father, Lester Lloyd Coke) and you may not see anything (records), but it doesn't mean that persons (business owners) were not being intimidated at that time," argued Senior Superintendent Clifford Chambers, head of the Organised Crime Investigative Division, the unit set up in 2003 to stamp out extortion, among other criminal activities.

"These were 'dons' of their time and if you understand the concept of dons, it would mean that you control people and you can influence people within the area that you call your turf," added Chambers.

"If we can associate how it operates now, then you could ascribe the view that probably it existed then," he continued, explaining that a dearth of reports about extortion in that time makes it impossible to pinpoint who first started charging business owners for their protection.

Between late last year and this year, only six persons have been arrested and charged with extortion. The number is "that small because of the cooperation that we are not in receipt of [from business owners]," said Chambers.

Chambers in March this year launched an anti-extortion campaign which he said was aimed at bolstering trust among the police and business owners and to sensitise them about best practices in dealing with extortionists.