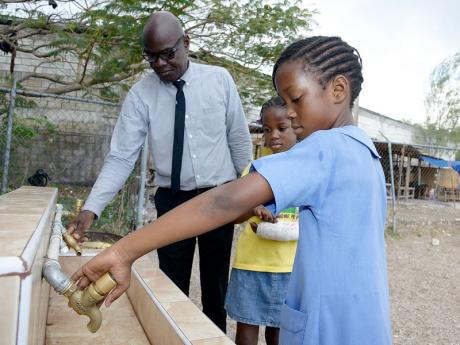 Noel Watt, principal of Dunrobin Primary School, along with students Kelsie Spaulding (left) and Kayla Spaulding, didn't get a drop of water from these pipes at the school yesterday. - Gladstone Taylor/Photographer

Several schools in Kingston and St Andrew were forced to close early yesterday due to a lack of water. And in fact, a number of principals have stated that if the dire situation continues, they will have no choice but to close for Easter break earlier than planned.

"We have reached a crisis level," declared principal of the Dunrobin Primary School, Noel Watt.

"We have been experiencing low or no water for over three weeks now, but this week, it has really reached crisis proportion: No water at all! And the sanitary convenience has become really deplorable, so we had no choice but to close school."

He added, "With the exception of the grade-four students, who will be doing the Grade Four Literacy mock exams, we will be closed for the rest of the week. If come Monday we are faced with the same situation, then I will have no choice but to close school early for the Easter break and resume on (April) 28."

Watt said they have made several attempts to get water trucked to the school but to no avail.

Noting that the institution has always been faced with the problem of water-storage capacity, the principal said, "We need to do something urgent to acquire some tanks for the school."

Earlier this week, the National Water Commission (NWC) advised that the continuing decline in inflows to its major water-supply facilities in the Corporate Area has resulted in the water-storage level at the Mona Reservoir and the Hermitage Dam falling to a critically low 36 per cent and 20 per cent of capacity, respectively.

The entity further advised that while it was doing the best it could in a difficult situation, customers were being urged to be understanding, to expect disruptions, and to do all they could to store and conserve water.

Taking shelter from the pouring rain yesterday afternoon, parent, Ann-Marie Lawrence, looked up to the sky at the irony. She was called to pick up her son early from Dunrobin Primary because of the lack of water.

"This is very bad. They need to set up some system for the school to get water. The school cannot continue like this. My son has exams and I also have to make some arrangements to keep him 'cause I can't take him to work," she said.

Closing school at 11 a.m., principal of Camperdown High School, Valentine Bailey, said he was hoping to reopen today, given that the NWC had trucked water to the institution in the evening.

"However, we don't know how long that will last or when water will return, so I can't say how we will proceed come next week. We will determine that tomorrow (today). We are talking about 1,800 students plus staff, so without water, that is a serious health risk," Bailey said.

Parent, Charles Francis, said the Government needs to ensure that schools have an adequate supply of water to avoid such a grave situation.

"This is silly! They have exams coming up and will miss out on a lot of lessons because of this, which can't be good," said the father, who had to pick up his son early from Camperdown High.

According to the Ministry of Education, since the beginning of the week, 25 schools in Kingston and St. Andrew have been affected by the drought, several of which were forced to close. Among them were Dunoon Technical, Dunrobin Primary, Tarrant Primary, and Camperdown High.

"We anticipate that by tomorrow (today), more schools may be forced to close if they do not get water. The ministry will make up for the lost days closer to the summer term by extending school days," Dorrett Campbell, deputy chief education officer, schools operation, in the Ministry of Education, told The Gleaner.

She said the ministry had been working with the NWC to assist as much as possible, but the number of schools without water kept increasing, which has affected the response.

"Between the water and education ministries, we are working to mitigate the situation," said Campbell.

In the meantime, education minister Ronald Thwaites said schools must remain open if possible. He is also asking parents to provide children with water for drinking purposes and for washing hands.

Schools in (Kingston and St Andrew) severely affected by the drought: