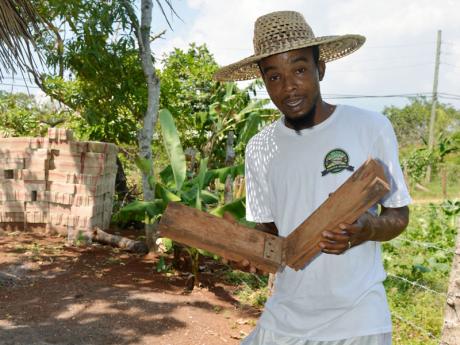 Nigel Haughton shows off the old handmade oil press which he used to make his first bottle of oil from the Jamaican Sweet Almond at his home in Red Ground, Negril. 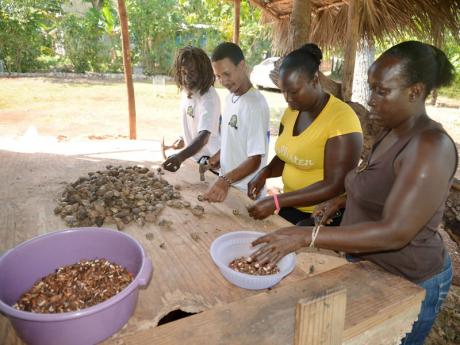 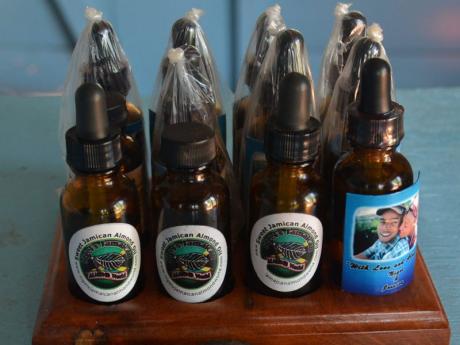 The almond oil made by Nigel Haughton is bottled in these one-ounce flasks at his base in Red Ground, Negril. It takes more than 500 almonds to make one ounce of the oil.
1
2
3

Negril resident Nigel Haughton says it was divine intervention that led him to a life-changing discovery featuring one of Jamaica's most common, yet probably most underrated, fruits: the Jamaican Sweet Almond.

It was also his entrepreneurship spirit and drive to be self-reliant that led him to make virgin almond oil from pressed Jamaican sweet almond and to establish his company, Nigel's Sweet Jamaican Almond Oil. He, along with his wife Jessica, also has the distinction of being Jamaica's first official almond farmer.

Haughton grew up and lives in Red Ground, a community which, though nestled in the midst of the Negril tourism Mecca, has been grappling with high unemployment and other social problems.

After leaving the Negril All-Age School, Haughton attempted to venture into furniture-making, having learnt the skill from his father, a master furniture maker, but his love story with almonds is the one Haughton loves to tell.

"I had a cousin, Lenroy McClacken, who had tools that Haughton had got from his father. We decided to turn the shed at his yard into a furniture shop. We got a contract from one of the boutique hotels to build furniture for them.

"After that was done, we had a problem getting more work," Haughton told Western Focus.

"We decided that we had to get a job to accumulate some more money so that we can make some windows and some doors, introduce it to the hardware downtown, and see if we can get a contract to supply them because we realised there was not much going for the furniture business," Haughton added.

To achieve their goal, both men obtained jobs as pastry salesmen with a local bakery and opted to travel to Montego Bay daily to sell the items on the streets of the city. However, after a while, they realised that despite their love for the job, the 20 per cent commission they were earning was not enough.

"It was my cousin's idea to sell something else on the side to make some more money so that we would be able to do what we wanted to do. We were looking for something that nobody else had that we were guaranteed would sell off every day," he said, adding that after contemplating several ideas, including water, cheese, peanut drops, and coconut drops, they almost gave up.

"So we started laughing at each other, and while laughing, I remembered I was going to have to go back in the sun to work for 20 per cent," he added. "So I stopped laughing and I started thinking. I gave up, took a deep breath, and said 'God, what am I going to do?', and I held my head up and looked to the sky while exhaling, and I saw the almond limb over my head with the bunches of almonds."

From then, Haughton's life not only changed for the better, but improved steadily. After discussing making almond drops, something both thought was a brilliant idea, they started collecting almonds from under the tree and literally "got cracking".

"All along, the almonds were on the ground in front of us. If I hadn't asked God the question, 'What am I to do?', we would have never seen the almonds. We made 60 drops. At the time, we didn't even have money to buy a pound of sugar and ginger or bags to put the drops in. We went up to the shop and credited two pounds of sugar and ginger and bags," he said.

Within two hours after arriving in Montego Bay the following Monday, the $100 almond drops were sold off - to Haughton's delight. Haughton later diversified his product, branching into honey-roasted almonds (using similar ingredients he had seen on a packet of honey-roasted peanuts) and salted almonds.

It was while cracking the almonds that he noticed that when the nuts were accidentally crushed while he tried to remove them from the kernels, his fingers became lightly coated with oil. Haughton, who was by then married, showed it to his wife Jessica.

"I remembered I was watching a movie and saw a lady making the olive oil from olives by pressing it and squeezing it and there was olive oil running. And I thought, 'If I could get oil from this almond without adding any heat, this would be virgin almond oil'.

"A few days later, I got two pieces of two-by-four piece of wood. I wrapped it in Saran Wrap (plastic wrap), attached a door hinge, loaded it with two handfuls of almonds, put on two furniture clamps, and got a large bowl to collect. I started clamping it, and when I looked, I saw one drop (of oil), then two drops, then it started running. And it proved to me that yes, I can get almond oil."

Today, Jessica does the labelling and packaging of the oil, which is known for its healing properties and effects on the skin and hair. The oil is available in several resorts in gift shops in Negril, including Jackies on the Reef, Rockhouse, and Zimbali Retreats. Seven residents are employed full time, and all the production activities are done in the Red Ground community.