The Dragon brings Caribbean together 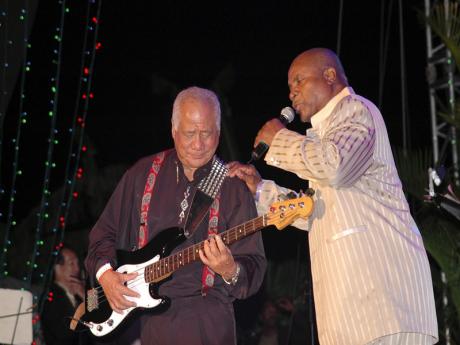 While Christians will be celebrating Easter a week from now, Carnival revellers will be jumping and gyrating to soca rhythms at various venues across Jamaica.

Jamaica Carnival, which came into being in April 1990, became a permanent fixture on the Jamaican music calendar, and over the years has evolved into one of the biggest annual events in Jamaica.

Interestingly, both events, (Easter and Jamaica Carnival), viewed from the standpoint of moral rectitude, seems to occupy opposite ends of the moral scale in the eyes of many, so much so that Christians, in particular, staged a strong protest at the outset, to organisers juxtapositioning Carnival celebrations with those of Easter.

The idea for a Jamaica carnival was conceptualised by the late Jamaican music pioneer, Byron Lee, who had a plan to bring the music, energy and vibe of Trinidad and Tobago's annual carnival event to the island.

Lee was, no doubt, inspired to do so through his many visits to the twin-island republic where he became closely associated with their calypsos, celebrations, and The Mighty Sparrow, considered the Calypso King of the world.

In the early days, Lee's band - Byron Lee and the Dragonaires - was known as a 'Jump-up band', which played its own brand of calypso - a mixture of mento and jump-up music.

In an interview this past week with present and long-serving keyboard player of Byron Lee and The Dragonaires band, Neville Hinds, he recounted the band's transition from this 'jump-up sound' into soca (soul calypso) music, which is inextricably linked with Carnival.

"It was in about 1965-66, we went to Trinidad. The band used to do shows, playing regular music at that time with vocalists, the Blues Busters, at cinemas around the Caribbean. 1967 was the beginning of the soca days with the band. The band was invited to Trinidad for their Independence celebrations in 1971, and the following year was the first time we went to Trinidad for Carnival. Thereafter, the band became a regular fixture for Carnival, where we played soca and calypsos," Hinds said.

In another interview, Byron Lee paid special tribute to the Calypso King.

"When Sparrow brought me to Trinidad, he taught me, and I learnt from him the true beat of soca and some of his lyrics," Lee explained.

The ensuing experiments with soca music, which was indeed the basis for Carnival, saw the Dragonaires working out with Eastern Caribbean stars like Gabby, Arrow and The Mighty Sparrow, whose collaboration with Lee produced the immortal album Sparrow meets the Dragon, on the appropriately named SpaLee Records label.

Featuring a mixture of slow and soca pieces, the Sparrow and the Dragon were at their immaculate best on the cuts, Born Free, Only A Fool Breaks His Own Heart, No Money, No Love, and Maria - a slow rudimentary soca piece, which saw Sparrow in a romantic mood:

Maria darling, I must go

Unfortunately we must part

you don't know how it breaks

but until we meet again I know

The band 'put the icing on the cake', by surrounding Sparrow's voice with rich horns and piercing percussions.

Byron Lee and the Dragonaires continued to contribute to the Caribbean music potpourri with successful efforts at blending reggae as much as possible with soca, and assisting Caribbean integration, by bringing artistes from various areas of the region more closely together.

The Byron Lee, Neville Hinds, A. Cassell co-produced 1984 soca recording of Tiny Winey became the biggest soca hit of the mid-to-late 1980s, and remains one of the big draws at Carnival celebrations.

A big hit across the Caribbean and in the United States, it sent a message to soca practitioners that Byron Lee and the Dragonaires were experts.

Byron Lee's contribution to Jamaica's entertainment industry is obvious outside of Carnival and soca music, however.

He created history with his first recording, Dumplins, in 1960. Done on his own Dragon's breath label, it became the first ska recording to reach the top-10 of the Jamaican charts, amazingly so, since ska did not become a popular genre until 1961-1962.

Dumplins also created another phenomenal music industry statistic when it became the first ska recording done in Jamaica to be released on the United Kingdom's Blue Beat record label.

The then minister in charge of culture, Edward Seaga, whose brainchild it was, also commissioned Lee to compose a recording that could be identified with Jamaica and the new dance craze.

The result was Jamaica Ska, by Keith Lyn and Ken Lazarus:

It is the new dance that goes

Bow your head, swing your

now do a dip

Earlier, Lee bridged the gap between uptown and downtown by taking ska, which was associated mainly with ghetto settlers, uptown.

Ironically, Lee reversed the roles and closed the musical gap even further by taking soca music from uptown and introducing it downtown. He was truly a man on a mission.