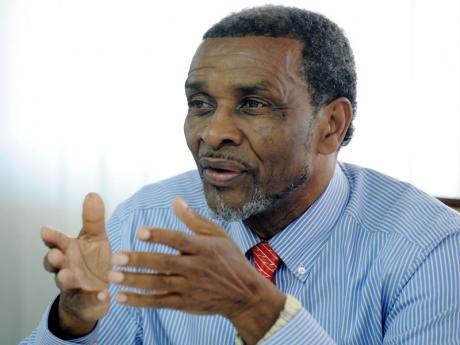 Dr Trevor Gardner, president of NCU, said the university was lenient in its ruling.-Jermaine Barnaby/Photographer 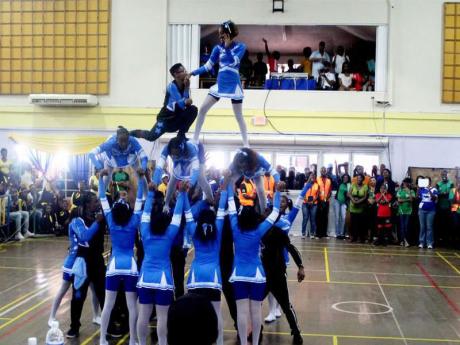 Sha-Shana James (left, atop pyramid) participates in a cheerleading routine at NCU. She was subsequently suspended and banned from student activities.-Contributed
1
2

Two news items have been sitting on my chest like overnight jackfruit, with an equally persistent odour on my fingertips.

At Northern Caribbean University (NCU), a cheerleader deviated from the script that was approved by the university and performed what the prudish might call a risqué routine in a risky presentation.

The female student, playing the part of a male groom on top of a wedding cake-simulated pyramid, kissed the hand of the 'bride', and almost her university tenure, goodbye, in one fell swoop. This cross-dressing gender-bender was 'dragged' before a committee and seems to have been thrown the full length of the rod of correction.

Allegedly, irrelevant questions such as whether she had a boyfriend were asked. Somehow, in the mind of her inquisitors, a union with a member of the opposite sex indicates a person's sexual orientation. However, I would suggest that instead of looking at the upper heights of this acrobatic, they look down-low at the married persons in their flock.

True, she might not have helped her cause if, as reported, she attended the hearing with a tongue piercing. This would have impeded her ability to defend herself eloquently, but I am in stitches that she was penalised for not having her identification card during her trial. Then if it is such an indispensable item, how do they know she is who she says she is? After all, she clearly, by their standards, has identity issues.

Nevertheless, looking from the perspective of an artist and sociologist, there is nothing on the face of it that is offensive. Still, all universities have rules, which form part of the 'contractual' relationship with the student. The breach of rules comes with sanctions, but NCU has acted with a heavy hand and a tough boot.

Furthermore, it is strange that she was the only student in the troupe who was penalised, and her punishment of being permanently banned from all student performances and other extra-curricular activities seems excessive. Such a sentence reprises images of another controversial individual with other body mutilations. However, while she might not like snakes, she surely hasn't killed any lizards.

Anyway, I am not a Seventh-day Adventist (SDA), and I have no problem with getting the ass out of the hole on the Sabbath or any combination of these words. NCU is an SDA institution and must, on the surface, keep up its image, even if it isn't done with transparency.

It is, nonetheless, an entity that voluntarily sought and gained the recognition and registration of the University Council of Jamaica. This means that it cannot simply say that it is independent and answerable only to internal critics. Its particularistic rules and procedures must withstand universal scrutiny. In the past, I would have asked President Herbert Thompson, but I am still uncertain why he left.

A note to NCU, however. In the 1970s, Catholic high school, St George's College, with a dominant Jesuit ideology, openly admitted Rastafarian students and allowed them to espouse their Rastafari faith and wear dreadlocks. There may be 160,000 SDAs here, but there are a billion Catholics globally. Rather than focusing on the Old Testament dispensation of punishment, we must focus on the New Testament covenant of grace and forgiveness. After all, the old law keepers collaborated with the anti-Christians to nail Jesus on the plus sign in Holy Week.

Speaking of charges and impending trials, I have always made it clear that I support the constabulary as an institution, but I have no loyalty to any particular policeman or woman in any official capacity. Any member of the force, or civil society for that matter, who runs afoul of the law has to be dealt with via the processes of law and order.

Some eight members of the force in the Clarendon Division have been charged by the Independent Commission of Investigations (INDECOM), the body created by Parliament to probe matters relating to the misconduct of the security forces. This came against the background of frightening allegations that police personnel were involved in extrajudicial killings in that parish. For its part, INDECOM has indicated that it is examining around 40 such homicides, clearly with a view to prosecute, if necessary.

Police Commissioner Owen Ellington disclosed that it was he, who after his own investigations, using the resources of the constabulary, decided that the matter should be reported to INDECOM for further action. Once charged, the officers must, like any other individual, be brought before an appropriate court, given proper procedure and have their guilt or non-guilt determined. Every member of the constabulary must have a vested interest in having truth determined.

For their sake, I hope that the reports are false that other Clarendon-based police personnel have taken industrial action because of the course taken by INDECOM. A sick-out, which is what they have reportedly pursued, has the same status as a strike under the Labour Relations and Industrial Disputes Act, 1975, because it is a "course of conduct ... which, in contemplation or furtherance of an industrial dispute, is carried on ... with the intention of preventing or reducing the production of goods or the provision of services".

Apart from the wrong signal that it could send to the public, that the police in that division consider themselves above the law and beyond the scrutiny of the legally appointed entities, it is also conduct which contravenes the Jamaica Constabulary Force Book of Rules, and, if interpreted strictly, violates the Constabulary Force Act. Moreover, all forms of industrial action constitute a breach of contract at common law and render the perpetrator liable to dismissal.

Indeed, while I am fully aware of the impact the charges have on the morale of their co-workers, let me ask them, what would they say or do if the charges were true? Of course, they should support their colleagues during these trying times, but, like the academics in the adjacent parish, they must be committed to truth and justice.