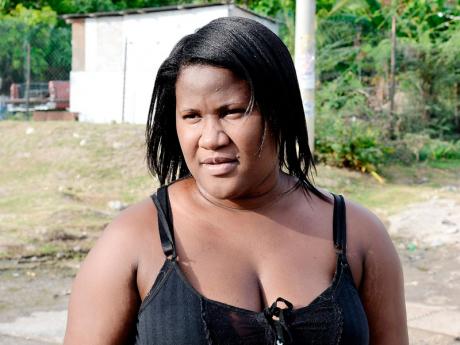 The Government has agreed to compensate a St Andrew woman with just under $9 million for a misdiagnosis that she was HIV-positive.

But that is not enough for 28-year-old Karen Reid, who suspects that medication she was treated with nine years ago might have affected her baby, as she was pregnant at the time.

"Well, I think I am satisfied with the outcome of the case, but there are things that are still bothering me because my son was born blind in the left eye as there is no pupil in that eye," Reid told The Sunday Gleaner.

"I still remember the incident from time to time, and I am not 100 per cent satisfied in certain ways because I can't get a doctor to say whether the treatment I got because of the false test results caused the blindness in my son's eye. No one will tell me the truth," said Reid, adding that her son "is a slow learner and this has been linked to the problem with his sight".

According to her, it was two years of agony after a government medical official told her that she was HIV-positive in 2005. In 2007, a second test proved that she did not have the virus which causes acquired immune deficiency syndrome, shortened AIDS.

A pregnant Reid in 2005 went to the Harbour View Health Centre in St Andrew and she received the horrifying news that turned her life upside down. In April of that year, she started going to the facility for antenatal care. An HIV test was done and two days later she received a call from the health centre. When she went in a nurse told her, in the presence of a counsellor, that she was HIV-positive.

"I was in absolute shock, confused and could not believe what I had heard. I simply wanted to die," recalled Reid.

Her boyfriend was called and tested for HIV but the result was negative.

According to Reid, when her boyfriend heard that she was HIV-positive it caused tension in the relationship, and he argued that the unborn child was not his.

"I was treated like an outcast by family members and people in the community," said Reid.

When it was time to deliver her baby, Reid said the medical staff at the Victoria Jubilee Hospital, where she had been sent for antenatal care, said it would be in her best interest to have a Caesarean section.

She went into labour and after a successful surgery, she was advised that she could not breastfeed the baby.

The mother returned to the hospital six weeks after giving birth as she was still being treated as an HIV patient. Later, she was referred to the Comprehensive Health Clinic on Slipe Road, Kingston, where she was given a cell level test. Medical personnel there told her that the cell level was good, following a test which measures the number of CD4 cells in a sample of blood.

Along with other tests, the CD4 count helps tell how strong a person's immune system is, indicates the stage of your HIV disease, guides treatment, and predicts how your disease may progress.

Some time after, Reid asked a doctor at the clinic why she did not have the signs and symptoms of someone who is HIV-positive. Another HIV test was done at the clinic and when she got the result on May 17, 2007, it was negative.

"I had mixed feeling. I did not know whether to laugh or cry and I just felt a deep sense of betrayal," said Reid. "I was happy that I was not HIV-positive but I am still bothered by how my life changed because of the false HIV test results. I feel depressed at times about the incident and how it has affected my life and that of my child."

Reid noted that the false result caused an end to her relationship with the child's father and she was left to fend for herself. She was also scared of the unknown - whether the baby would get the virus.

The soft-spoken woman told The Sunday Gleaner that even today she still remembers the agony, shame and pain she endured.

Reid sued the Government in 2009, and last week, acting Supreme Court Judge Audrey Lindo awarded her $8.5 million in damages for negligence, $285,000 for corrective surgery to her abdomen, as she had to undergo a Caesarean section because of the false test result, and $200,000 for future psychiatric expenses.

She was also awarded $44,000 for special damages. Interest was awarded on the sums at three per cent per annum from 2009 to date of payment.

The Government has accepted liability and the case has gone for assessment of damages, which will determine the level of interest to be paid.