'Jamaica in better place'... but this fiscal year 'won't be any less of a fight', says Byles 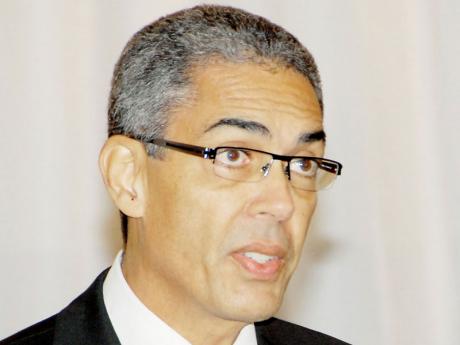 "There is no doubt that the Jamaican economy is in a better place today than it was 12 months ago," said Richard Byles, co-chairman of the Economic Programme Oversight Committee (EPOC).

But despite the improvements, it is important that no one feels "overconfident", Byles said, as the year ahead "won't be any less of a fight".

Byles was speaking at a media briefing at the Sagicor head office in New Kingston yesterday.

EPOC was responding to public statements from Finance Minister Peter Phillips that Jamaica had met the fourth-quarter primary surplus target and that he expects a positive International Monetary Fund (IMF) programme review for the end of March.

But Byles said EPOC's comments were on the presumption that the minister's information was accurate, as it had not yet seen the official preliminary or final results.

"I'm taking him on his word," Byles said.

Jamaica's reaching its primary balance target "is a very significant development for Jamaica," Byles said. "Not many people believed we could achieve this target."

"However, we still have a long way to go," he said. We should see "big challenges for this fiscal year."

Chief among those will be to achieve a primary balance target that is $10 billion higher than last year's and attaining "meaningful economic growth", Byles said.

The emphasis going ahead must be growth, which has proven to be "a little more elusive than we hoped for", he said. And what is most needed is an improvement in employment numbers.

Growth will require a greater collaborative effort between the public and private sectors, Byles said, adding that it "needs more than the magical hand of the market to drive growth".

Meanwhile, one of the greatest positive effects that the improved figures is having is a rise in the level of confidence, the EPOC co-chairman said. Previously, a general "lack of confidence" had been a major inhibitor to economic growth, but with the recent success of passing the IMF tests, that has been significantly eroded.

Other economic improvements during the year include a reduction in the debt-to-GDP ratio, to 138 per cent from 146 per cent - with a goal of a 60 per cent ratio, he said.

Another was Jamaica's passing the fiscal rule, as well as other IMF-approved legislation, in what was "Jamaica's most active parliamentary period I can recollect," he said.

GDP growth from October to December of 1.8 per cent is positive, he noted. The growth was led by the agriculture and bauxite industries, and the strong growth needs to be seen in the aftermath of 2012's Hurricane Sandy.

"So many Jamaicans have made sacrifices for this to happen," he observed. They include civil servants who have had a wage freeze, bond holders, and consumers who have had to deal with price increases due to the depreciation in the currency.

"Jamaica is happy that we have not sacrificed in vain," he said.

The improvements came about despite a fall-off in taxes. "Tax revenues have consistently underperformed since August 2013, caused primarily by shortfalls from international trade taxes ($6.6 billion) as a result of lower imports; PAYE ($3.4 billion); tax on interest ($1.5 billion); and stamp duty ($1.5 billion)," said an EPOC news release.

Byles also came out in support of the 360MW generation project. "We need to get going with it ... we need to take what we have and make sure it delivers what is promised," he said.

Byles said he was also keeping an "open mind" on the possible use of coal for power generation by bauxite companies and the proposed Chinese logistics hub.

"Jamaica needs every single opportunity to spur growth," he said.