JUTC hits back at Martin Henry 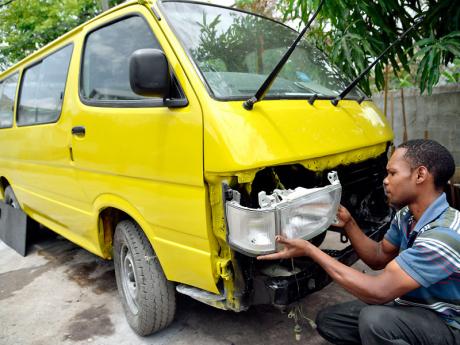 Oral Myers reassembles this minibus after a duco job giving it the uniform Jamaica Urban Transit Company (JUTC) yellow at a garage on Oakland Road, St Andrew, yesterday. It is now a requirement for all buses operating in the Kingston Metropolitan Transport Region to adopt the colour code of the JUTC. - Norman Grindley/Chief Photographer

The Jamaica Urban Transit Company (JUTC) is accusing Gleaner columnist Martin Henry of being irresponsible in comments he made about the bus company's reformation of the subfranchise system in The Kingston Metropolitan Transport Region (KMTR).

In his column titled 'JUTC swipe unjust', published in The Sunday Gleaner of April 13, Henry said the JUTC's actions "have been a major provocation both to private investors in public transport and to the long-suffering commuting public". Henry, who was quick to point out that he was not advocating violent attacks against the JUTC, also expressed surprise that the company experienced such few attacks.

But the bus company, unhappy about the comments said, it "cannot understand why Henry would construe the latest measures by the company to improve its service as 'a major provocation' to anyone, except those who would not wish to see a more efficient public transportation in the Kingston Metropolitan Transport Region".

The JUTC also believes that Henry was being "less than responsible in indicating that he was surprised that the JUTC had not come under more violence for its actions to reform its subfranchise system. The company feels an expression such as uttered by the columnist could serve to encourage more attacks on JUTC buses by hoodlums."

Henry described the actions of the JUTC as draconian. He wrote, "Subfranchise licences have been unilaterally pulled. For select operators, relicensing fees have been astronomically jacked up. Fees have been moved from the region of $300,000 per year to $750,000 and are due now."

The JUTC responded, "Nothing could be further from the truth. All of the licences to which he referred had expired and the operators had to reapply. The JUTC made changes to the configuration of the licences using objective criteria. The company categorically denies that it "unilaterally pulled" any licence,".