I can break my records! 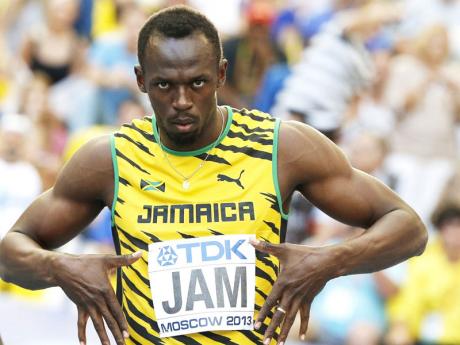 It has been more than five years since Jamaican superstar Usain Bolt shattered his own world record marks in the 100 metres and 200 metres at the 2009 IAAF World Championships in Berlin, Germany.

However, track and field's poster boy is convinced that he still has it in him to go even faster than the 9.58 and 19.19-second world records, and says that he is looking forward to getting up to top speed in the upcoming season, after suffering an injury recently.

The 27-year-old, who resumed training at the weekend after his manager Ricky Simms reported that his foot was sore a few weeks ago, also underlined that he is not bothered by the setback, adding that he expects to be back to his best soon.

"(The injury) is nothing serious ... my experience has taught me that that's just the nature of the sport," Bolt told The Gleaner. "Setbacks are a part of track and field. I have come to accept that a long time ago. I had mine, and (I'm) now back in training preparing for the upcoming season."

If he is to lower the marks, he will need to be at his best, but the five-time IAAF World Male Athlete of the Year is fully confident that he will set new marks before his time in the sport is done, particularly after the encouragement of his coach.

"I have discussed with my coach what it will take to lower these records, and he thinks it's very possible," said Bolt, who is coached by Glen Mills at the Racers Track Club. "I trust my coach completely, so if coach Mills says they can be broken, then I know I can lower them."

Bolt added that he is looking forward to posting strong times this season and believes that Jamaica stands a good chance of breaking the Santa Monica Track Club's 1:18.68 4x200m world record at next month's IAAF World Indoor Relays in The Bahamas.

"(The IAAF World Relays) should be a lot of fun," Bolt said. "Relays are always the best part of any championship for me."

"Jamaica has a lot of talented athletes, so I have no doubt that we can lower the (4x200m) record," he added, without confirming whether he will actually be able to compete at the May 24 and 25 championships.

"I just want to run some fast times and finish the season injury free so I can focus on these three major championships coming up," Bolt said.