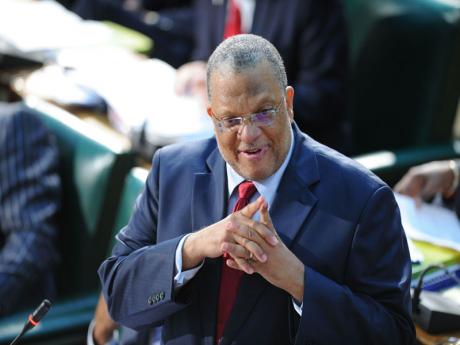 Finance Minister Dr Peter Phillips on his feet for the opening of the 2014-2015 Budget Debate. 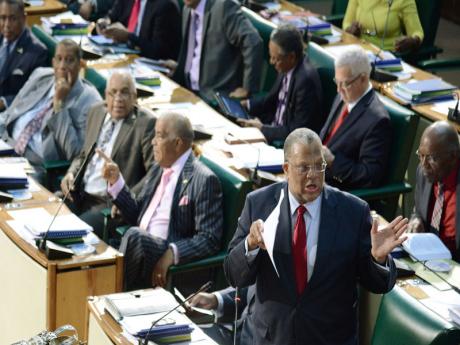 Finance Minister Dr Peter Phillips on his feet for the opening of the 2014-2015 Budget Debate.
1
2

The Government is coming under increasing fire over the announced new tax to be imposed on withdrawals from deposit-taking institutions, starting June 1.

Finance Minister Dr Peter Phillips announced the new tax as he opened the Budget Debate last Thursday, and said the measure was expected to gain $2.25 billion this fiscal year, which would provide the bulk of the $6.7 billion in new taxes which the Government is budgeting to collect.

The tax will be calculated on a graduated rate system, with withdrawals less than $1 million being subject to a 0.1 per cent tax.

This means that Jamaicans will pay $1 for every $1,000 they withdraw from deposit-taking institutions through electronic banking, point of sale transactions (debit cards), cheques, banking hall transactions,
ABMs, ATMs, and Internet transfers.

The only exception
is Internet transfers made by a person between his accounts in the same
financial institution.

Since the announcement, more and
more persons are demanding that the administration rethink the levy,
while others want it removed.

Opposition Spokesman on
Finance Audley Shaw immediately called the move heartless, and yesterday
told The Sunday Gleaner that a similar proposal was
made to him in 2010 while he was finance minister and it were rejected
outright.

According to Shaw, when the suggestion came he
ordered the Bank of Jamaica to do a study on bank charges, as at that
time the European Union was very concerned about bank charges in the
Eurozone.

"It was a suggestion I rejected as a
minister in 2010 because I believed then, as I do now, that it is just
wrong," said Shaw, as he argued that the bank fees faced by Jamaicans
were already too high.

"So regardless of what CaPRI
(Caribbean Policy Research Institute) and the Bank of Jamaica come up
with from their studies, you cannot have a straight line comparison with
other countries because they are not suffering the same way we are
suffering.

"The comparisons with the United States and
several countries in Europe and the Caribbean did not reflect a true
picture as they have stable currencies, stable inflation rates and did
not have electricity cost about to reach US$0.40 per
kWh."

According to Shaw: "The Government is already
taking interest on saving accounts. The Government has now joined with
the banks to make the cost of doing business more expensive. It's
unfair, it's unacceptable and we are not going to support
it."

He was supported by president general of the
Bustamante Industrial Trade Union, Senator Kavan Gayle, who argued that
the new taxes now put an additional burden on those whose salaries fall
below the income tax threshold.

"It is the stupidest
tax to be levied on defenceless people in a long time. We are powerless.
We can't do anything about it, because improved technologies have
forced nearly all persons to use ATM cards to carry out transactions.
What this means is that every time I do a transaction, it is a further
erosion of disposable income," Gayle told The Sunday
Gleaner.

Civic groups Jamaicans United for
Sustainable Development and Citizens Action for Principle and Integrity
have also urged the Government to rethink the
tax.

However, financial economist Dr Andre Haughton
and financial analyst Dennis Chung have argued that the tax is not a bad
one in the general scheme of things.

"The new tax is
not a bank fee, but a government fee, although it impacts your banking
transactions. It's not as significant as we think it is, but to some
people, losing $10 from a transaction is significant," said
Haughton.

"The bottom line is that we are looking at
how to move the economy forward, the Government itself must find more
creative ways to earn revenue, and they must tie up inefficiencies in
the tax-collecting system," suggested
Haughton.

Meanwhile, some Jamaicans have taken to
social media to voice their concerns.

"This is
heartless quadruple taxation! Has the finance minister gone mad? You put
a little money aside as savings and it's taxed. You get a bit of
interest and it too is taxed. You withdraw some and it is taxed. You
spend what you've withdrawn, it is taxed (GCT). Lawd have mercy man!,"
declared 'Minto Ice Monarch'.

"Now whoever came up
with this idea is one unconscionable evil thing. Check the levels! You
work, get paid, 25 per cent automatically goes for taxes. The other 75
per cent goes to the bank, because that is how it is, everyone gets paid
via direct deposit. It hits the bank and they take a cut. You withdraw
some to pay bills and such and the bank takes another cut and now the
government wants another cut," charged 'Lady
Love'.

"The government has taken it too far now. This
deserves more national attention and we the people of Jamaica need to
protest about this," declared 'Free
Thinker'.

"Everything is tax. This is an evil and
wicked system. I am getting out this system before it is implemented,"
added 'Yerf Small'.

"So if you have an arrangement
with your employer to pay salary into your account you must now pay
'Sista P' to withdraw your own money to buy food, pay electricity and
water bill, pay your rent, etc. This tax is sinful and must be resisted
at all costs," charged Fabian
Williams.