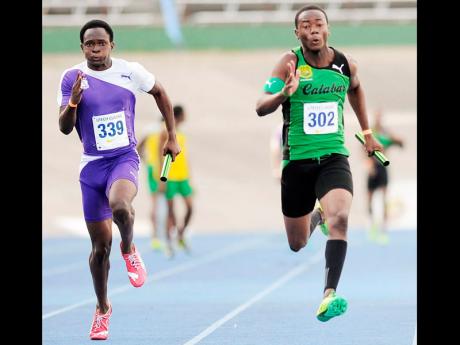 Romario McKenzie (right) piloting Calabar High to victory in the boys' sprint relay at the recent UTech Classic ahead of Kingston College's Antonio Henry. Calabar won in 40.06 seconds with KC second in 40.26. - file

When Kingston College became the first Jamaican school to compete at the Penn Relays in 1964, the purple-and-whites started with a bang. Tony Keyes, Rupert Hoilette, Jimmy Grant and Lennox Miller won the 4x110 yards sprint relay. Fittingly, 50 years later, there is a strong Jamaican contingent in the event this time.

Calabar High will race for their sixth Championship of America 4x100m title this weekend in the United States with a team that has confounded the experts. After its 'full strength' squad ran early season times of 40.04 and 39.61 seconds, Calabar blasted those marks at Boys and Girls' Championships. Edward Clarke, World Youth Champion Michael O'Hara, Julanie Walker and Seannie Selvin clocked 39.35 seconds.

That was unfathomable with Javon Francis out and O'Hara off-key. A Championship of America title is within reach and so is the Penn Relays record. It stands at 39.78 seconds by Wolmer's in 2010.

Jamaica College and St Jago High will keep Calabar on alert. They were second and third behind Calabar in the Champs Class One race, both with times under 40 seconds. The Spanish Town-based St Jago can add exciting Class Two sprinter Raheem Chambers to a group that already has World Youth 400 champion Martin Manley.

That's a pity. The Class One KC team ran 40.03 in early February with Hughes on anchor and 40.05 without him at Champs.