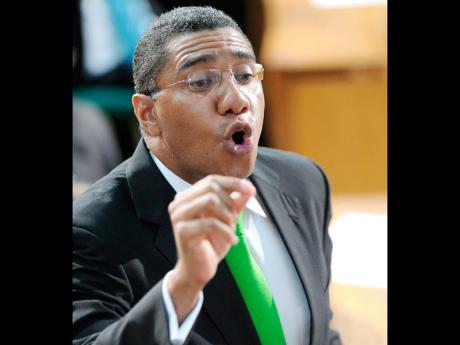 Opposition Leader Andrew Holness making his contribution to the 2014-2015 Budget Debate in the House of Representatives yesterday. - Ricardo Makyn/Staff Photographer

SIGNALLING THAT the Jamaica Labour Party (JLP) is about to go into campaign mode, Opposition Leader Andrew Holness told the House of Representatives yesterday that the party has a range of policy options it intends to implement the next time it forms the Government.

"We, in the Opposition, are preparing ourselves. We are ready. We will be hitting the road to answer the call of the people," Holness said, as he made his contribution to the 2014-2015 Budget Debate

The Opposition Leader proposed the setting up of a knowledge, economy and growth ministry to ensure Jamaica benefits from the knowledge industry as well as the proposed logistics hub and international financial centre.

"We are thinking in radical and new ways to achieve take-off," the opposition leader said.

The JLP, under Holness, was booted from office in December 2011, after four years at the controls. The party lost the election by a 2-1 ratio in the 63-seat House of Representatives.

But yesterday Holness said the people have been subjected to pain and punishment by the Portia Simpson Miller-led administration, which he argued has destroyed social mobility through a politics of poverty.

In outlining his plans for the new ministry, Holness said it would combine the training sections from the Ministry of Education with some aspects of economic planning from the ministries of Finance, Industry and Commerce, and the Ministry of Science and Technology.

"You need a ministry that is actually ensuring that the subjects that people are taking in school, that the career path that people are going into match what is currently needed and what is projected," Holness said.

He said the ministry would, among other things, be charged with the task of making Jamaica the regional training hub, establish a system of national apprenticeship and internship for the Jamaican youth and ensure that skills and know-how match industry needs, both current and projected, to reduce frictional unemployment.

"I don't want our people to just be the consumers of other people's knowledge and know-how forever. I don't want our people to be the ones doing the low-skilled jobs forever. Certainly, in the International Financial Services Centre, we should have an advantage," Holness told Parliament. "Nevertheless, we must ensure that our people are well trained as part of the competitive advantage of our business destination, so that it's more cost effective to use local workers."

He said if he was prime minister, he would redirect a portion of the funds now being used to fix roads to the Caribbean Maritime Institute to help develop the knowledge economy.

He said if Jamaica is serious about the International Financial Centre and the Logistics Hub, the country must make the investment to ensure its citizens can benefit from being part of the Jamaican fabric.

"Those two industries rely on nothing else but people," Holness said. He warned that unless there is investment in human capital, both projects will be staffed exclusively with imported labour," Holness argued.

"If I were the Government, the money that I am taking to fix roads, I would take it and invest it in developing the human capacity of our people. That is how you are going to earn the money to fix roads, otherwise (all) you are doing is fixing roads but creating another debt trap."