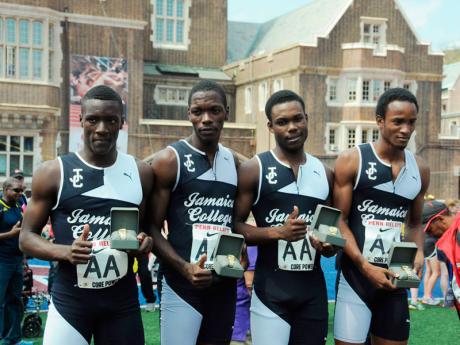 Members of the Jamaica College team who scorched the track at the Penn Relays yesterday to win the Championship of America sprint relay in a record 39.72 seconds. Displaying their commemorative watches after the win are (from left) Waseem Williams, Devaughn Baker, Keneil Patterson and Tyler Mason.-Photo by Collin Reid courtesy of VMBS and Jamaica Bickle

PHILADELPHIA, Pennsylvania:Jamaica's high schools had another dominant day at the 2014 Penn Relays in Philadelphia yesterday.

Jamaica College (JC) were the standout team as they stunned their rivals with a record time win in the Championship of America 4x100 metres final.

JC, the only team to go under 40 seconds in the preliminary round of the 4x100m on Friday, were lifted by another scorching second leg from Mason and smooth baton changes all the way. The Orville Brown-coached team surprised favourites Calabar who took second in 39.85 as Jamaican schools occupied the first six places. Third were St Jago (40.23) and they were followed by St Georges College (40.32), Kingston College (40.35) and Wolmer's Boys' (40.78).

Coach Brown was not surprised by JC's win.

"For us this was not a surprise as we have been doing well all season and after our sub 40 seconds at Champs we were extremely confident. Leading up to [this] meet we worked very hard on our baton passes and they were excellent twice," said Brown who thanked Carrington Facey, Fredrick Wolfe, Nicholas Tracy and Ricardo Thompson, four members of the victorious 1984 4x100m Penn Relays team who helped to motivate the squad for the entire season.

"Redemption for Calabar after our loss in the 4x100m," said head coach Michael Clarke on a day when he was honoured at the meet.

Favourites St Jago High closed the meet on a winning note for Jamaica as the quartet of Ivan Henry, Martin Manley who ran a brilliant second leg, Shamar Barnes and Nathon Allen clocked 3:11.73 to take the 4x400m. St Elizabeth Technical (3:13.07) finished second with third going to Calabar High in 3:13.70. Kingston College were sixth in 3:18.63.

Wolmer's Boys' picked up two of the individual wins yesterday. The outstanding Jaheel Hyde posted 51.13 seconds to take the 400 metres hurdles, ahead of St Elizabeth Technical Marvin Williams who was second in 51.49.

Hyde's teammate, Christoff Bryan, made up for his loss at last week's Carifta Games in the boys Under-20 high jump as he took the event for the second year in a row with a best of 2.12 metres. Calabar High's Javair Fairclough finished third with 2.03 metres.

There was also an individual win for Jamaica College as Clayton Brown captured the high-school boys triple jump with a leap of 15.35 metres. Anthony Bailey of Munro College was third with 14.64m.