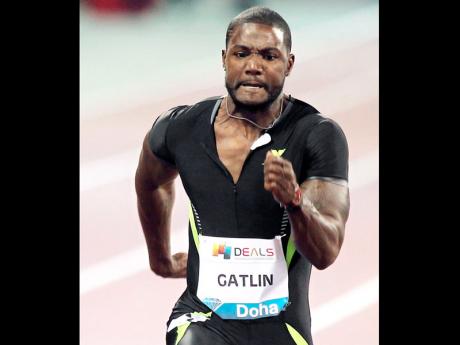 Top American sprinter, Justin Gatlin, said he is excited about competing in the island at this Saturday's IAAF World Challenge Jamaica International Invitational, at the National Stadium.

The 32-year-old told The Gleaner that he heard he has a solid support base in Jamaica and is anticipating a lot of energy from the crowd when he lines up in the 100m field.

Gatlin, who has won medals at every major international meet, except the 2011 IAAF World Championships, since his return to the sport, following a drug ban in 2010, only last Saturday helped the USA to a close win over Jamaica in the men's 4x100m at the Penn Relays.

This will be the athlete's first 100m of the season, after opening up with a 200m in Florida on April 19 with a 20.55 clocking. After ending last season with his second fastest time, 9.85, not very far from his 9.79 personal best, Gatlin is hoping to get his footing right in Jamaica.

"I will be in Jamaica and I am just really looking forward to getting things going there," said Gatlin.

"They say I have a lot of fans in Jamaica, so hopefully I will see it there, but it should be a very good race," he added.

Gatlin also said the Jamaica International Invitational has developed a reputation of pushing athletes to good opening times and he is targeting the same.

"I have watched, over the years, a lot of athletes open up in Jamaica and run fast times, so I am looking forward to doing well there," said Gatlin.

The 2012 London Olympics 100m bronze and 2013 IAAF World Championships silver medallist will face a number of top local and international athletes, who have secured lanes in the men's 100m.

Gatlin's biggest challenge is expected to come from Jamaica's Nesta Carter, who finished just behind him in the bronze medal spot at the World Championships, with the two enjoying a healthy rivalry over the years.

In 11 meetings over the 100m, Gatlin has beaten Carter seven times, but the Jamaican is expected to push him all the way on Saturday.