Business and consumer confidence up, but still low 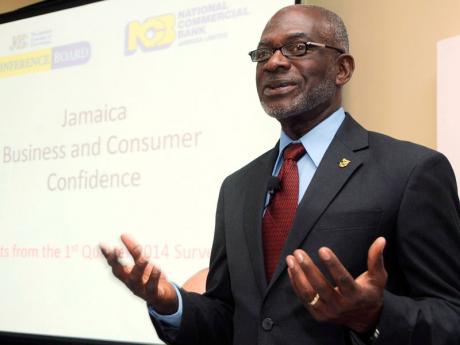 Business and consumer confidence have increased by double digits for the first quarter of 2014, according to the latest results from the Jamaica Conference Board.

Consumer confidence also improved, increasing by almost 11 per cent over the previous period.

"But before you go jumping and clicking your heels, the results do not mean that the economy is doing well," Anderson said Tuesday as he presented the findings of the quarterly survey done by his firm for the Conference Board.

"This doesn't mean that we are out of the woods by any means," he said.

Despite the increases for almost all areas, confidence levels are "nowhere near the highs" of previous periods and are coming from two quarters of extremely low levels, Anderson said.

So this is really a "check" on the previous low levels and represents the "first uptick for some time," he said.

Businesses are saying that profits are rebounding, investments are improving, and they have a more positive outlook for the economy, Anderson said.

The Consumer Confidence Index was 104.7 for this quarter, compared to 94.6 in the previous quarter and the all-time low of 86.7 in the third-quarter 2013 survey.

"Jobs are hard to come by," said Anderson, but he adds that there has been an uptick in the outlook for jobs, with a jump of 100 per cent on the index.

Still, with 57 per cent of consumers expecting job prospects to worsen for the year ahead, the index jump "is neither here nor there" because it is still a very low number, he said.

"It's just that people are less pessimistic," he said.

Consumers think their own economic conditions will improve, but even that is "more of a hope than an expectation," Anderson said. As a consequence, more people are expecting to go on vacation, to buy a car, or buy a house.

The depreciation of the Jamaican dollar against the US dollar and the pound sterling has created a positive effect, where the 38 per cent of consumers who receive remittances believe they are seeing an increase in the Jamaican value of their funds.

The Jamaica Conference Board started its survey of confidence in 2001.

The announcement of the results comes in the wake of public announcements earlier in April by Finance Minister Dr Peter Phillips that Jamaica had met the fourth-quarter primary surplus target and that he expects a positive International Monetary Fund programme review for the end of March.

Also in mid-April, Richard Byles, co-chairman of the Economic Programme Oversight Committee (EPOC), said that one of the greatest positive effects that the improved figures coming out of the Ministry of Finance was a rise in the level of confidence.

Byles said that previously, a general "lack of confidence" had been a major inhibitor to economic growth, but with the recent success of passing the IMF tests, that has been significantly eroded.