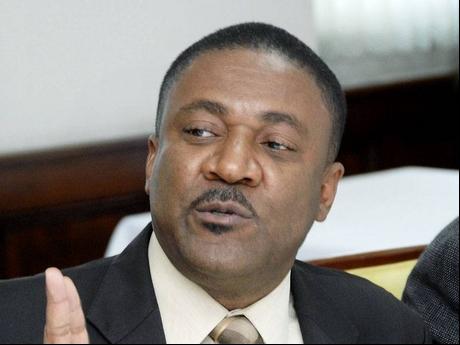 ENERGY MINISTER Phillip Paulwell is seeking to nudge Contractor General Dirk Harrison's office into conceding that it erred when it concluded that the decision of the Office of Utilities Regulation (OUR) to facilitate the acceptance of Energy World International's (EWI) proposal to participate in the bidding process for the supply of 381 megawatts of energy to the national grid was "unfair and irregular and a clear breach of the law".

Harrison's office formed the opinion after a special investigation into the procurement process, and this view has led to the Inter-American Development Bank (IDB) deciding against facilitating a loan to EWI to undertake the project.

"I believe that if we are patriotic, we must see that what has happened with the IDB as a damnation on our country, and the OCG (Office of the Contractor General), the OUR, and I need to rectify that," Paulwell said yesterday as he addressed journalists at Gordon House. "I am hoping that some clarification will be brought to the process … . I don't think Mr Harrison has responded to the OUR's refutation of his report. Something has to be said."

He added: "In the end, I am hoping that the OCG's position will be modified to enable this process to be viewed directly by the international lending agencies, and I believe that the process is clearly provided for in the policy framework and that the OUR did nothing wrong," the minister said.

The OUR had responded to the OCG's report with a point-by-point rebuttal. The OCG did not respond to the points raised in the rebuttal but said it was left with "no other alternative but to consider two courses of action, which it could have recommended to the OUR".

It said that "given the untidy, inappropriate, and irregular state of affairs and the poor handling of a very significant project of such national interest, the process is to be aborted in its entirety, (or) rely on certain fundamental principles and tenets attendant to certain provisions of the Government of Jamaica (GOJ) Procurement Guidelines and the Contractor General Act in an effort to preserve the integrity of the process since the OUR was acting inconsistent with GOJ Policy".

"In the national interest and to maintain a balance without compromising the integrity of the process, the OCG chose the latter," the OCG said.

But Paulwell has maintained that there was nothing wrong with the process and has argued that the current situation is a blot on the country's name.

In the meantime, Paulwell said the Government had been in touch with the local IDB office and was prepared to go to the top to have the matter resolved.

His comments came even as Therese Turner-Jones, the IDB's representative to Jamaica, said it would be awkward for the Government to get involved in a matter between it and a private entity.

Turner-Jones also said Jamaica needed to ensure the integrity of its processes.

"A country like Jamaica really needs to pay attention to transparency and good procurement practices. We have been giving advice on that area, and we would be hardpressed to not follow our own advice," she said.

Yesterday, EWI said it had deposited the requisite funds with the Hong Kong-based bank, HSBC, to pay over to the Jamaican authorities as the performance bond.

The firm also said HSBC Bank had committed to processing the money to pay the bond to the Jamaican Government as soon as possible.

It said with the problem raised on Saturday when the IDB refused to participate in project financing for the power project, together with heightened corporate governance and money-laundering concerns, the bank must adhere to compliance procedures.

Paulwell said the Government "made checks", and the money was lodged, but the OUR said it advised Paulwell that EWI "to date, has not posted the US$36.85-million performance bond".

Paulwell said the IDB, from as far back as February, said it was interested in partnering with EWI on the project.

"The IDB said to them, 'We don't have an issue with EWI. We believe you are capable'," Paulwell said.

He noted that in addition to assisting in overcoming the obstacles at the level of the IDB, EWI has other multilateral entities to assist with the project and indicated that if the company needs the assistance of the Government at that level, the State is prepared to intervene.

If EWI gets past the current hurdles, it will have 26 months to commission the facilities that are critical to the reduction of the country's energy costs.

"Once the bond is perfected, I expect to get a date from EWI when ground will be broken," Paulwell said. "This project has to continue."