'Drop EWI or else' 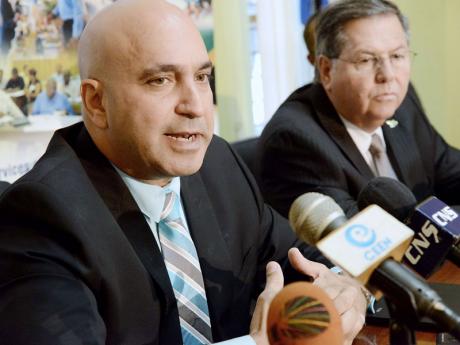 Chris Zacca (left), president of the Private Sector Organisation of Jamaica (PSOJ), and Brian Pengelley, president of the Jamaica Manufacturers' Association, speak to members of the media during a press conference yesterday at the PSOJ's offices in Kingston.-Rudolph Brown/Photographer

The perceived inept handling of the process surrounding the construction of the 381 megawatt power plant may cause a rift between the Government and the private sector.

The powerful private-sector groups, Jamaica Manufacturers' Association (JMA), Private Sector Organisation of Jamaica (PSOJ) and the Jamaica Chamber of Commerce (JCC), have called on the Government to abort the current process, while sounding a warning that they will not be sitting idly by if the process should continue.

They said the Cabinet should also rescind the licence issued to Energy World International (EWI) to provide 381 megawatts of base load power to the national grid.

Speaking at the PSOJ's Kingston offices yesterday, the groups said they have withdrawn all their members from the Energy Monitoring Committee (EMC). The private-sector groups had called on the prime minister to establish the EMC last October, in a bid to ensure the process was transparent.

In addition, the businessmen have called on Prime Minister Portia Simpson Miller to disband the EMC and establish a joint public-private energy enterprise team, "which would oversee and advise on the granting of a new 381 megawatt licence".

The group said the entire process surrounding the mega plant is at a catastrophic stage following revelations that Energy Minister Phillip Paulwell "had substantially amended, and in our opinion seriously weakened, the original licence he had signed".

There are concerns that Paulwell had changed the final

licence issued to EWI without consultations with the Office of Utilities Regulation (OUR) and the EMC.

In addition to this, the private-sector bodies cited as reasons for their collective position the failure of EWI to post the required US$37 million performance bond and the minister's granting of an indefinite extension for EWI to post this, along with the Inter-American Development Bank's (IDB) position that they would not finance the project due to a defective procurement process.

Delivering a joint statement on behalf of the groups, Christopher Zacca, president of the PSOJ, said all these occurrences "have led us to the view that the entire project has reached a point of crisis and has lost all credibility."

Zacca explained that the proposed energy-enterprise team should operate under similar terms as the teams working on the divestment of the Norman Manley International Airport and the Port of Kingston.

He said the team should be appointed by the prime minister "in consultation with her partners in the Partnership for Jamaica and report administratively to the Office of the Cabinet through the cabinet secretary".

Meanwhile, the groups have steered clear of calls for Paulwell's resignation.

Head of the JMA, Brian Pengelley, said it is not their call at this time; however, he said, "It is clear that the prime minister of Jamaica needs to take this over, make the calls from here if she wants to accept our restructuring suggestions".

Pengelley said they would have to consider their options if the process should continue along its current path.

Zacca noted that their pull out from the EMC should not be taken lightly, as it may have implications for other partnerships going forward.

"The EMC was an example of the type of collaborations that we want out of this relationship that we have built between the Government and other sectors within our society.

"The fact that we've pulled out of the EMC is an indication that what has happened has somewhat set back that relationship," he said.

The latest in a string of setbacks to have hit the process to build a US$737 million natural gas-fired power plant is the IDB's refusal to grant EWI a loan to fund the non-equity side of the project.

The IDB has cited concerns raised by Contractor General Dirk Harrison that EWI was unfairly included in the bidding process as its reason for denying the entity funding. EWI had previously paid US$7.37million as a bid bond on the project, after the first ranked American-based Azurest-Cambridge was unable to meet the deadline with its bid bond.

EWI had missed the window to pay its performance bond of US$36.85 million, which was due to the OUR on April 24, but said it had made the payment on Wednesday.